The PinchukArtCentre and Victor Pinchuk Foundation present works by 21 young artists across 17 countries, shortlisted for the 5th edition of the Future Generation Art Prize – the global art prize for artists aged 35 or younger. Established in 2009, 2019 marks the 10th anniversary of the prize’s founding.

An official Collateral Event of the 58th International Art Exhibition – La Biennale di Venezia, the show will be on view at the Palazzo Ca’ Tron from 11 May until 18 August 2019. The 21 exhibited artists, chosen from amongst 5,800 entries, include the winner of the $100,000 Future Generation Art Prize 2019, the Lithuanian artist Emilija Škarnulytė, and the winners of the $20,000 Special Prize, Gabrielle Goliath (South Africa) and Cooking Sections (UK).

The exhibition showcases existing works as well as new site specific pieces by the shortlisted artists which engage with the Palazzo Ca’ Tron and its history. Many of the works question the interpretation of knowledge, leading us towards a suggested model of a future archaeology or archaeology of the future. How will the present day be perceived 100 or 1000 years from now? What might humanity look like? How will the world be experienced?

Where many of those questions project concerns and proposals for tomorrow, other works engage with urgent unresolved dilemmas of today’s world. What place do local cultural traditions have in a globalized world? How do values survive in a technological age that sweeps away our sense of tradition? How does one identify in an age where nationalistic models seem to be at odds with globalised communities?

Those questions resonate louder in Palazzo Ca’Tron, situated on the Canal Grande, and owned by Istituto Universitario di Architettura di Venezia since 1972. It is a hub for teaching and thinking mainly on the subject of urban planning. Dating back to the end of the sixteenth century, the palazzo carries the name of Tron, one of Venice’s most noble and powerful families. The collaboration between the university and the Future Generation Art Prize allows us to combine the mission of both intuitions: empowering future generations.

The Future Generation Art Prize is a renowned springboard for emerging talent, with past winners receiving international acclaim, including Turner Prize nominee Lynette Yiadom Boakye and 2017’s winner, Dineo Seshee Bopape, who will represent South Africa at La Biennale di Venezia in 2019. The winner of the first edition of the Prize, Cinthia Marcelle, represented Brazil at the 57th International Art Exhibition. Open Group, who was nominated for the Prize in 2017, represents Ukraine at the Biennale Arte 2019.

Launched in 2009 by the Victor Pinchuk Foundation, the Future Generation Art Prize is a worldwide contemporary art prize, created to discover, recognise and give long-term support to a future generation of artists. It is important contribution to the open participation of younger artists in the dynamic cultural development of societies in global transition. 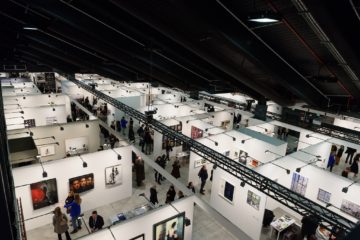