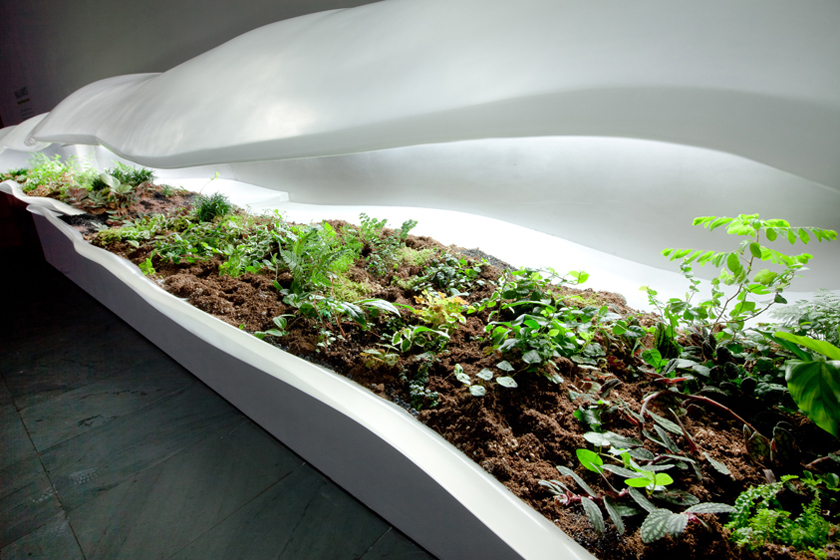 NEW YORK, November 9, 2010—The Museum of Modern Art presents an installation of two sculptures by New York artist and landscape designer Paula Hayes (b. 1958) that will be on view in the Museum’s lobby from November 17, 2010 through February 28, 2011. The installation, Nocturne of the Limax maximus, includes a fifteen-foot-long, wall-mounted horizontal sculpture called Slug, and a free-standing floor-to-ceiling structure titled Egg. Organic in form and containing a variety of living plants, the vessels will enliven the space during the winter season. The installation is organized by Ann Temkin, The Marie-Josée and Henry Kravis Chief Curator of Painting and Sculpture, The Museum of Modern Art, in collaboration with the artist.

Since the 1990s, Hayes has produced botanical sculptures—organically shaped vessels made from blown glass, silicone, or acrylic, and filled with a rich variety of plant life—that expand upon the classic terrarium, both through their imaginative containers and the microcosmic universes within. For the MoMA project, Hayes began thinking about the concepts of fertility and fertilization. While working on her initial drawings, she was inspired by a documentary film portraying the intricate mating ritual of the Limax maximus, or Leopard slug (which takes place in early summer, usually during the night), and the fluid columnar forms that emerge during the process of fertilization. Slug and Egg are made in cast acrylic and hand-blown glass, and filled with vegetation. Aided by built-in lighting and weekly maintenance, these “living artworks” bring nature directly into the Museum as they challenge conventional definitions of sculpture.