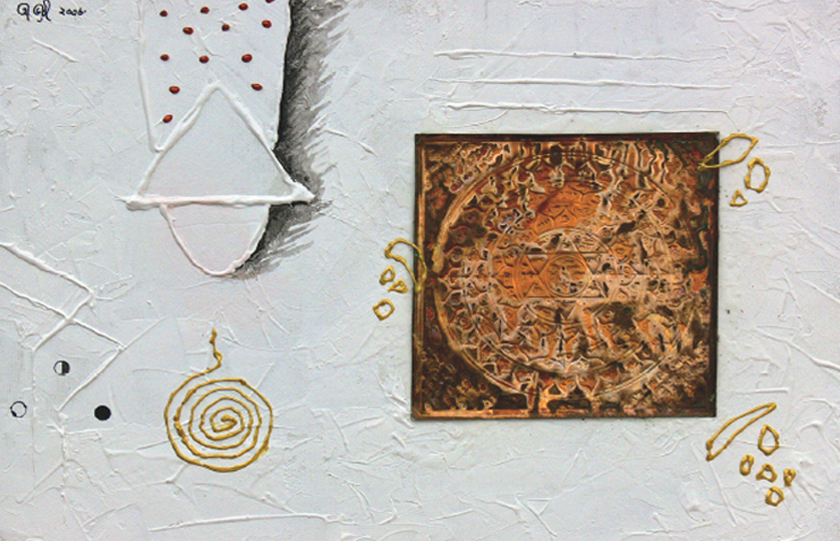 The East of West

During 1983 Arturo Schwarz starts the series Oriental Art and Wisdom by which he connotes to the best our cultural provinciality noting that nearly all the Greek and Latin classics have been translated and edited, but the 95% of Indian classics is still unpublished. We have no sure knowledge yet if the Greek philosopher Pythagoras who was coeval of Buddha, Vardhamāna Mahāvīra and perhaps Zoroaster, through Persia, took cognizance of Oriental philosophic speculations. The theory of metempsychosis was not particularly practised in the Western world accordingly to religions to come.   The idea of material energy circularity, of metempsychosis connotes the Eastern philosophy. During the twentieth century the West sought an answer to existential and spiritual problems through the Eastern thought.

Malevič suprematism conjoins western pictorial practise to that of Eastern cognitive one. During the sixties the knowledge of oriental philosophies, of Indian mysticism stimulate the monochrome art of Manzoni, Yves Klein, John Cage.

The Beatles themselves, that introduced the custom of retreat in the Ashram, create, after their stay at Maharishi Mahesh Yogi, the album White, evidence of a concept of unity beyond the fundamental differences.

India by seeking the primary harmony in the spiritual centre and the savage breath of jungle is the country of wild and sensual contradictions.

The increasing attention of Occident for the Oriental art and philosophy fuelled the international art market. The New Delhi annual appointment with the India Art Summit is the key evolution of Indian contemporary art.

The Indian modern art has a particular course that looks at Calcutta as the pulsating centre of culture. The intellectuals, back from Western countries, prepared a large retrieval movement, in agreement with Gandhi’s principles.

During my indian stays for the preparation of the exhibition, Springs of White, curated by me, Jalil Abdul, Soumitra Das – journalist of The Telegraph in Calcutta – the artists Daniele Lazzaretto and TK Harendreen, the poet and art critic Ashok Vayipej, President of New Delhi Lalit Kali Academy for the Arts, have guided my steps alongside the not so easy artistic landscape of Indian Art. Jalil Abdul, supporter of the Kerala artists led me in the New Delhi galleries. among which  Peter Nagy Gallery  e Palette Gallery.

I had there the opportunity to know the artist George Martin, author of a big exposition leading to red surroundings enlightened by leds  according to the indian poetic conception of the light.

The meeting with some artists like Prasanta Kalita, Shovin Bhattacharjee, Soumen Bhowmick gave me the opportunity for a less western knowledge (I hope so) of the indian art and of her evolution.

Soumitra Das reminds that the Indian modern art came into being from the curiosity of some intellectuals, Rabindanath Tagore among the others.

Artists in Calcutta are a little bit different from the ones all over other Indian States. The modern art movement was Calcutta-born. During 1922 an art exhibition for the works of Bauhaus teachers was held in Calcutta on Rabindanath Tagore’s initiative back from a visit in Weimar to the Bauhaus Institute. The works of Lyonel Faininger, Johannes Itten, Wassily Kandinsky and Paul Klee were exhibited but lost with no trace; fortunately it has been adequately documented.

Tagore, a friend of Gandhi, Father of the Nation, adheres to the Bauhaus movement by works kept in New Delhi’s National Gallery. Soumitra writes “Remember that Rabindranath himself can be considered the father of Indian modern art although he began practising quite late in life. Some leading Indian artists have taught at Kala Bhaban, he established in Santiniketan. This Institute gave birth to some most important artists who practise all over India. European Art practice was introduced in Calcutta with the establishment of what is known as the Government College of Art & Culture during 1854. Its principals like E. B. Havel and Percy Brown marked the Indian contemporary art. Academism is considered regressive but it is still pursued here nevertheless  some brilliant practitioners were born (Jogen Chowdhury, Ganesh Pyne, Bikash Bhattacharjee).

By Ernest Binfield Havel the Indian art recovers its pathway and futurism. E.B. Havel is professor of English art and author of studies about the Indian architecture, friend of Abanindranath Tagore and nephew of Rabindranath Tagore. He promotes in Calcutta’s Art School  an expressive reformation, starting a type  of avant-garde movement that calls on tradition as regeneration of Indian art portrayed by Mughal that it is an expression of cultural identity. EB HAvel, supported by historian Percy Brown, is against academic style of that period and Western materialism.

But long before them, during 1943, progressive artists like ParitoshSen, Nirode Mazumdar, Pradosh Dasgupta, Rathin Maitra, Subho Tagore, Prankrishna Paul and Gopal Ghosh create the Calcutta Group according to Soumitra. At least three years before M. F. Husain, Gaitonde and Souza founded in Mumbai the Progressive Artists Group. Calcutta has another art college at Rabindra Bharati University whose teachers have a more progressive attitude. It is true that  Calcutta’s artists create a lot of figurative works but they do create abstract and middle course ones as well. Those of two brilliant practising artists, Jayashree Chakravarty and Chittrovanu Mazumdar fall in the latter category.

Earlier, Rabindranath’s works explored the psychological terrain through his dark and mysterious paintings and drawings. He was a self-educated person and with no training he dared to do what other people did much later. His nephew Gaganenranath Tagore was deeply influenced by Cubism and it is even clear in his set scene for theatre. Bengali intellectuals of that period used to keep abreast of Western cultural movements. At the same time the Bengal school was popular and artists like Abanindranath Tagore, also Rabindranath’s nephew, Benode Behari Mukherjee, Nandalal Bose and Jamini Roy and some other nationalist artists introduced a style that harked back to the glories of Indian ancient and medieval art – Mughal art, miniatures – and Oriental Art.

Jahar Dasgupta is an artist and student of Benode Behari Mukherjee. He is among the leading exponent of Indian modern art with his supple and poetic womanly figures; they are the soul expression and the colour of his country.

The artist is the founder of Painter’s Orchestra. According to the Indian culture the past is deep in our times, it is alive in the breath of our daily acts.

Ms. Moitrayee Basu and Mr. Sanjoy Goswami opened a gallery in Calcutta and gave the name of Anastasia to reminisce and rejuvenate the genesis of creativity. It is an enlightening initiative in the world of Art and Culture. Hopefully to resurrect and encourage a novel and vivacious spirit from all over the world. Anastasia is the name of the gallery also inspired by the beauty of Grand Duchess Anastasia Nikolaevna of Russia. Actually it stands for a new “Resurrection” in the world of Art and Culture as the relevant voice of Dictionary explaines.

The Theme of First Exhibition is Fusion of Past with Future (Preteritus Per Posterus).

In the gallery’s collection, the Indian traditional art is represented by Sarbani Ganguly, the tradional and modern by Ashoke Ganguly, the realism by Arpan Das and Sanjay KR Datta.

The representational abstract language is – as said by D. Lazzaretto – a revolutionary expressive composition continually compared with the Indian culture. Ashoke Ganguly has a painting of poetry, of chromatic wide-ranging, solmizated by frangipani’s white flowers, dialogue, body ornament, centrality of narration, of parts peculiar to Siddhartha’s world.

Sarbani Ganguli assembles Hindu tales; he represents Durga the deity of creative power with a lusty and vital chromatic choice.  The Indian traditional art has different origins. Sarbani is affected by the world of old religion. The artist seeks the magnetism, the mysticism of places, of art, of UNESCO’s world wealth Ajanta’s and Ellora’s architecture, the Elephant Grotto, near Aurangabad. This area started an economic turnaround after having hard experiences. The Temples of Konarak, Laingaraj dedicated to Shiva inspire the representations of that paintings. Anjan Bhattacharya recovers the sign of traditional ornamentation and mythological-religious tales of Kalamkari Art.

Sanjay KR Datta realizes a realistic representation that takes from tradition the power and elements for his own style.

I think that Raghu Rai is one of the most important photographers all over India. He was presented during 2005 into Musei Capitolini in Rome. Daniele Lazzaretto emphasizes the greatness of the artist that works out a perfect neatness on canvas, film or photography from the daily chaos. The contemporary pictorial composition goes on the row of  traditional one for which the tales go into close spaces and not placed in perspective. The narrative succession runs over the fluidity of life not ticked by time.

The Kerala’s artist Ameen Khaleel organizes in his works the juxtaposition of images peculiar to his country with those of possible westernization  or to abstract excerpt.

India was present at 53rd Biennale of Venice with a juryman – Homi K. Bhaha, Humanities Centre manager of Harvard University and with the show of Sayed Haider Raza and Manish Pushkle introduced by Ashok Vajpeyi. The artists express a language of thought, of emotion, of energy, of search for light, definable in abstract according to the Western reading. Vajpeyi reminds that the old Hindi had words to express the feasibility of these situations.

Indian spirituality is present in dance, poetry, music and it pages the languages even though its many religions, intolerances, differences, oppositions. The art of  TK Harendreen immersed in the humanity, clear, intense follows this step.

His works sum up the philosophy and the concepts of Indian culture aiming to achieve the harmony. The Pat’s exhibition in New Dheli’s Niv Art Centre is an aesthetical vision expressed through different media. The Niv Art Centre  is an experimentation and comparison place. It is opened to artists and intellectuals of  all cultures. The artists met during the short Indian stay can be defined creators of visual temples, of quietness, of mental contemplation.