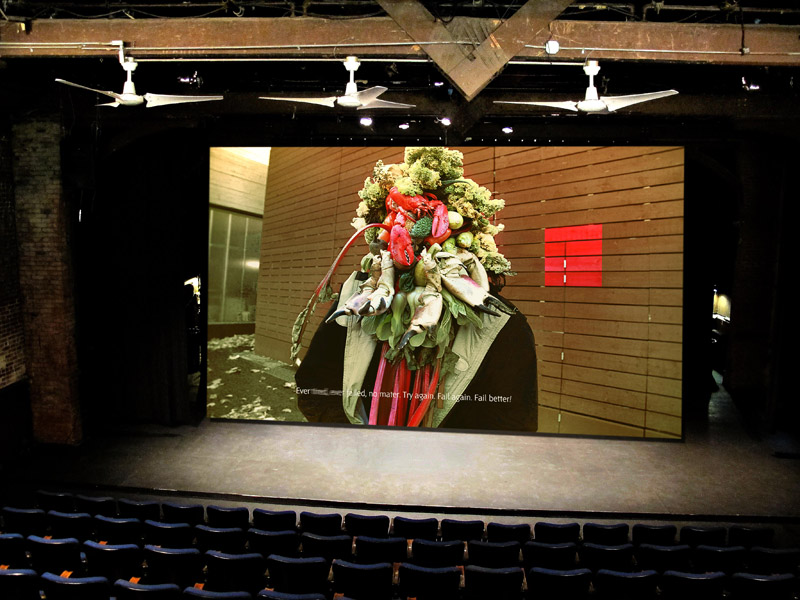 Performances / SACRED
This is a performance created for the Chelsea Theater, as part of the ongoing project “Kage where K for Kott” by the artist-performer Filippos Tsitsopoulos.

The dominant thoughts when someone enters in a room and sees an Arcimboldish figure covered with lobster fishes vegetables all type, till we can’t see anything of his head and part of his body, and above that dress, a face sized projection, projecting a real face over the masked one, who constantly speaking laughing and crying, will be to laugh! But in a one to one performance who will follow with duration of 5 minutes repeated every 15 minutes time (correct me if the timing is not rightand you want to readjust it), we will discover the end of this sympathetic figure, that at first was amusing us at the foigie.
His transformation in a kind of lobster-critic, capable to explain theatre under the name of Jan Kott, is a fact. While a projected head over the performers vegetable renaissance portrait will be switched on, the face of an actor who is struggling to produce a monologue, will arise. A monologue from Sara Kane`s (fragment from Crave play monologue). This will chock drastically with the overlapped interpreted text of the critic, who is made by vegetables and lobsters (Jan Kott, The Theatre of Essence, Kafka 8th chapter “A cage went in search of a bird”).
In this short throat video projection Mr. Kott, the critic, underneath the projection, and the Actor- video projection above, will coexist at the same time.
Philosophically talking, the criticism is alive in both representations in this work, as Kott, criticizing theatre and as actor, with the text of Sara Kane. If we analyze it visually, the forth wall is disappear, creating the “madness of the real”. A mix of a dragon, of Arcimboldo, of a Tony Oursler projection, but over a real face, an hilarious face covered with vegetables and lobsters, the remembrance of a surrealistic bird, a kabuki representation of a warrior with fruits, fishes and vegetables, Ionesco, and polish Theatre scene after the Second World War. Is evidence that we talk about the history of Art as the canvas for our inner feelings. Filippos in Chelsea theatre is presenting Kage where K for Kott, a special small event performance for that theatre, as part of his per formative film in London, embodying two characters. Both of them are collided at Filippos face. The Critic/Actor. Theatrical texts viewed as critic and criticism served as spoken text for theatre.
Both subjects will contain the desire and the disappointment of the artists and the critic, and the incomprehensibility of the public. Mixed texts and feelings will be collised in the performer’s stage who is the human face talking about disappointments, about life, and vulnerability of being or feeling real. Thank to Sara Kane and Jan Kott for juxtaposing, thanks to Art for the opportunity to put them together talking in the same face, at the same artwork, the same Sunday night, at the same boat for a while.