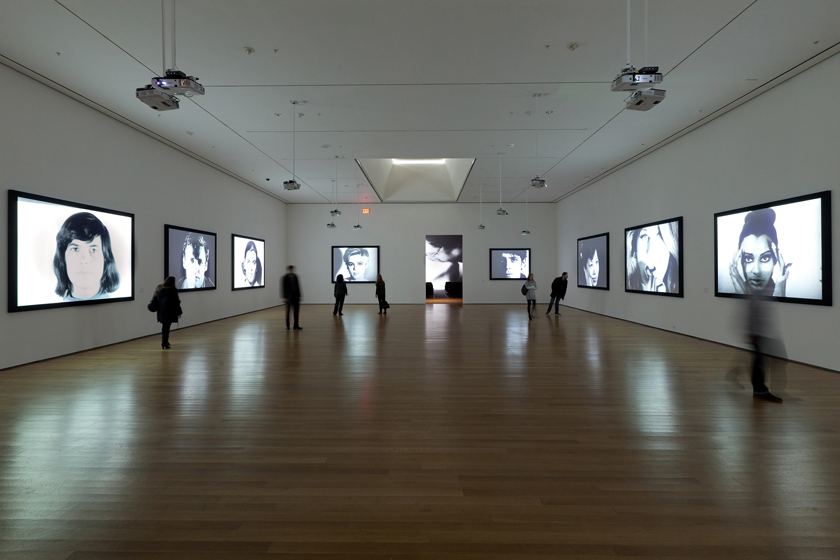 NEW YORK, December 8, 2010—Andy Warhol: Motion Pictures, on view at MoMA from December 19, 2010, to March 21, 2011, focuses on the artist’s cinematic portraits and non-narrative, silent, and black-and-white films from the mid-1960s. Warhol’s Screen Tests reveal his lifelong fascination with the cult of celebrity, comprising a visual almanac of the 1960s downtown avant-garde scene. Included in the exhibition are such Warhol ―Superstars‖ as Edie Sedgwick, Nico, and Baby Jane Holzer; poet Allen Ginsberg; musician Lou Reed; actor Dennis Hopper; author Susan Sontag; and collector Ethel Scull, among others. Other early films included in the exhibition are Sleep (1963), Eat (1963), Blow Job (1963), and Kiss (1963–64). Andy Warhol: Motion Pictures is organized by Klaus Biesenbach, Chief Curator at Large, The Museum of Modern Art, and Director, MoMA PS1. This exhibition is organized in collaboration with The Andy Warhol Museum in Pittsburgh.

Twelve Screen Tests in this exhibition are projected on the gallery walls at large scale and within frames, some measuring seven feet high and nearly nine feet wide. An excerpt of Sleep is shown as a large-scale projection at the entrance to the exhibition, with Eat and Blow Job shown on either side of that projection; Kiss is shown at the rear of the gallery in a 50-seat movie theater created for the exhibition; and Sleep and Empire (1964), in their full durations, will be shown in this theater at specially announced times. A Screen Test of Ethel Scull will be shown outside the exhibition entrance in its original 16mm format.

In the summer of 1963, following his painted portraits of American icons like Marilyn Monroe, Warhol began experimenting with the creation of time-based portraits using film. With his first movie camera—a silent 16mm black-and-white Bolex—Warhol filmed Sleep, featuring poet and performance artist John Giorno. The film is composed of various shots of Giorno sleeping looped together into five and a half hours of non-action. The film Kiss consists of pieced-together, slowly moving images of different couples kissing, which was shot over the span of several months. This vocabulary of expanded duration and minimal content culminated with Empire, an eight-hour filmic portrait of the Empire State Building.

From early 1964 to November 1966, Warhol experimented with the filmed portrait in an extensive series of nearly 500 works—the ―Screen Tests.‖ Photographed at The Factory (Warhol’s studio in New York City from 1962 to 1968) on 16mm black-and-white film stock at the standard sound speed of 24 frames per second (fps), the portraits were intended to be projected at 16 fps, the speed of earlier silent films. The result is an unusual slowness and fluidity of pace, a rhythm gently at odds with the large-scale close-ups nearly abstracted by stark light and shadow. Warhol’s first subjects were asked to emulate a photograph by not moving or speaking. While some individuals were invited to “perform” a Screen Test, others were captured spontaneously.

The exhibition originated at MoMA in 2003 under the title Andy Warhol: Screen Tests, organized by Mary Lea Bandy, then Chief Curator of the Department of Film and Media, who developed the concept of projecting Screen Tests onto framed canvases that mirrored the original surfaces of the 16mm projection screen, thereby creating a portrait gallery. With the addition of Andy Warhol’s silent films, the show debuted as Andy Warhol: Motion Pictures at KW Institute for Contemporary Art, Berlin, in 2004. Over the past five years, Klaus Biesenbach has organized a tour of the exhibition to Rio de Janeiro, São Paulo, Buenos Aires, Miami, Moscow, and Prague. A movie theater in the gallery and a Screen Test in its original 16mm film format—that of Ethel Scull—have been added for the present iteration of the exhibition.

Before Warhol’s death in 1987, he determined that his films should be cared for by MoMA, and in 1997 generous support from The Andy Warhol Foundation for the Visual Arts enabled the Museum to preserve and return to circulation his films, whose copyrights are held by the Andy Warhol Museum, Pittsburgh.

SPONSORSHIP: The exhibition is supported by Jerry I. Speyer and Katherine G. Farley.

PUBLICATION: Andy Warhol: Motion Pictures, published in conjunction with the exhibition’s showing at KW Institute for Contemporary Art, Berlin, in 2004, focuses on the artist’s Screen Tests and non-narrative films from 1963–73. Included are sequences of his “most beautiful women‖ and other works that showcase a parade of friends, actors, and models. This collection of tests is followed by the artist’s non-narrative films including Eat, Sleep, Kiss, and Blow Job. Essays by Callie Angel, Mary Lea Bandy, Klaus Biesenbach, Laurence Kardish, and Wayne Koestenbaum. Forewords by Glenn D. Lowry and Tom Sokolowski. Available at the MoMA Stores and online at MoMAstore.org. Hardcover, 12 x 9.5 in./266 pgs / 210 duotones. Price: $35.00
WEB SITE: Beginning December 14, members of the public are invited to create their own screen tests by visiting MoMA.org/screentests for guidelines adapted from Warhol’s own filming techniques. Users then submit their 90-second screen tests via a dedicated Flickr group on the site. Films will then appear on the site altered to simulate Warhol’s preferred projection speed.
No. 69 Press Contact: Daniela Stigh, 212-708-9747 or daniela_stigh@moma.org Margaret Doyle, 212-408-6400 or margaret_doyle@moma.org