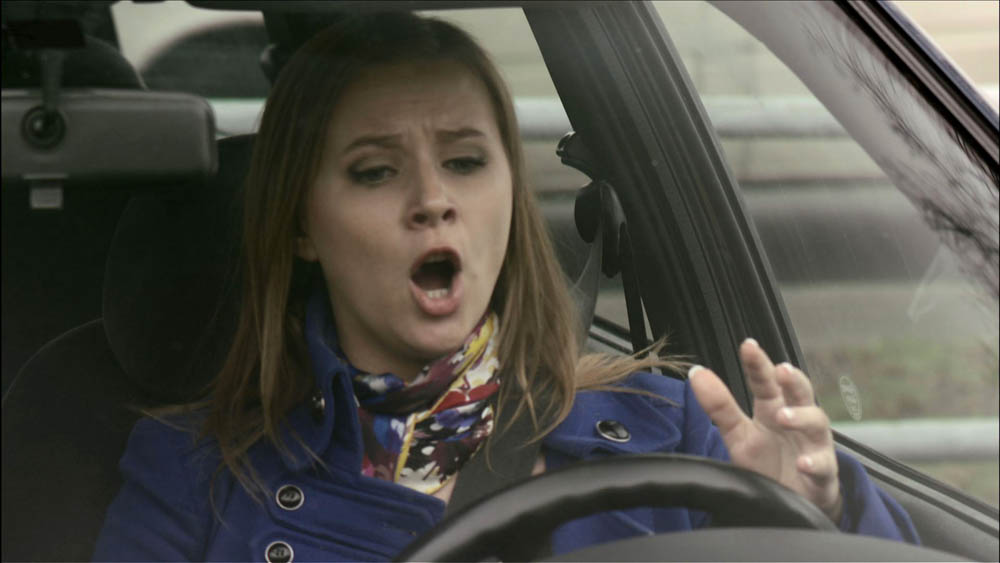 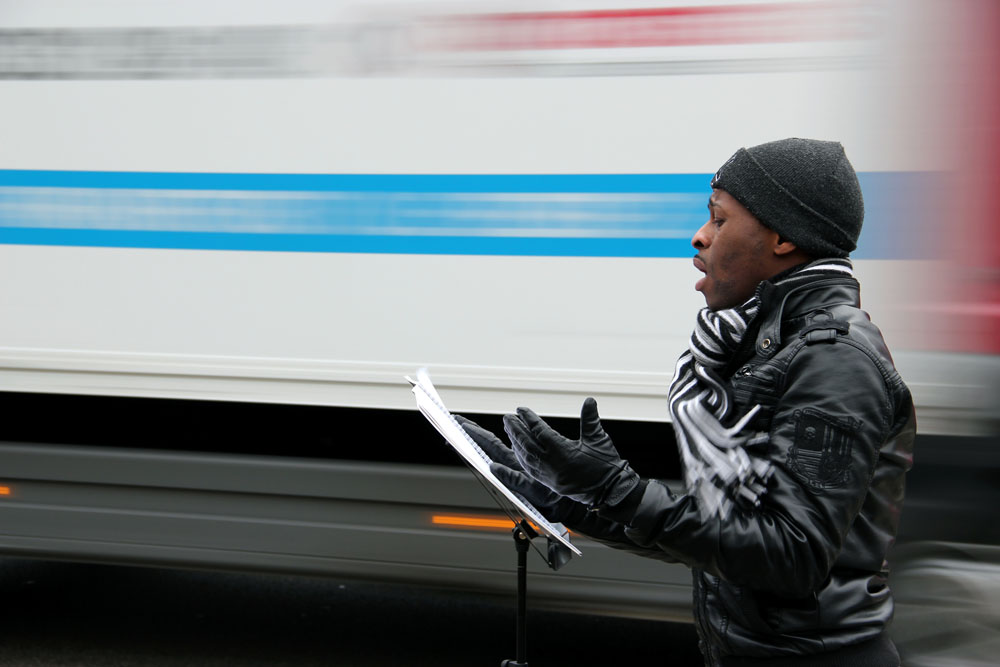 EXHIBITION AT THE HUNGARIAN PAVILION
In autumn 2010, Műcsarnok / Kunsthalle Budapest announced a competition for curatorial commission and exhibition at the Hungarian Pavilion for 2011. The members of the jury, invited by the then national commissioner Zsolt Petrányi, were the following: Gábor Andrási (art historian, editor-in-chief of the journal Műértő), Géza Boros (art historian, deputy head of department at the Ministry of National Resources, Department of Arts), Dóra Hegyi (art historian, project leader of tranzit.hu), Edit Sasvári (art historian, vice director of the Museum Kiscell / Municipal Picture Gallery), Katalin Timár (curator of Ludwig Museum – Museum of Contemporary Art, curator of the Hungarian Pavilion in 2007) and Krisztina Szipőcs (art historian, head of the Collection Department at Ludwig Museum – Museum of Contemporary Art, editor of the journal Balkon).

SHORT DESCRIPTION
The skeleton of the work is an experimental opera that takes place on the stage of life, relating, and reflecting on, the stories of car crashes in a dialogical form: the critical moment slowed down by memory and related in utmost detail; the drive and the course of events leading up to that moment; as well as the complex relation of man to driving, in view of his inclination to fetishize his technical objects.
Filling the space as an acoustic experience, the piece will also be presented at the show in the form of a musical film.
The installation is complemented with the librettos of the dialogues, namely the written records of the passive interviews, as well as the real life wreck of a car totalled in a crash, which occupies the space as an evocative artefact. Beyond the individual events that are recorded, sung, or impressed in a chassis, the composed versions of individual life stories suggest the possibility of determinacy with regard to human destiny. 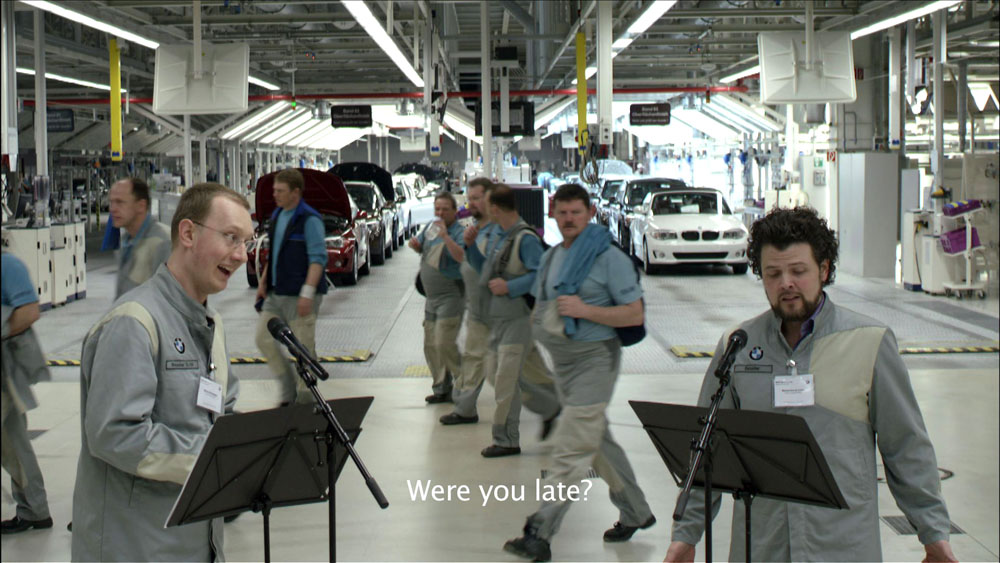 CURATORIAL CONCEPT
Hajnal Németh’s complex installation of multiple components treats the halls of the Hungarian Pavilion as acoustic units: music fills each space synchronously yet with slight differences. Walking around the exhibition halls, the visitor is free to discover the various layers of sound and meaning, the lyrics, the music, as well as the ambient noises in the presented video.
On the one hand, the installation is bombastic and theatrical; on the other, it displays subtle and philosophical design. The totalled wreck of a car is flooded in red light against the sonic backdrop of a musical composition that evokes associations of improvisational, experimental opera, its libretto based on interviews with survivors of car crashes.
Perambulating the spaces, the observant visitor may experience at least three different stories. Firstly, that of sung recollections of car accidents; police reports in the form of interviews, also available for reading on site. Secondly, the narrative of the motor vehicle as a fetish object of the 20th century, as the presented video footages were shot at typical key sites of car manufacturing and use. The third narrative is the visitor’s own, as there is no set route for the audience at the pavilion. As if the shock-like, punctual time-frame of an accident were unfolded at once linearly and cyclically, leaving the acts of perception and exploration to the rhythm of the spectator.
Hajnal Németh is serious and intellectual, but she wraps this in the façade of mass culture. Her work can be related with existentialist literature as well as the phenomena of Eastern European “new pop”. Nevertheless, no sooner do we hypothetically imagine such an analysis than it is short-circuited by the amplified warning of a colour, shape or sound in this context. The aesthetic of her unique work lies in this individual-existentialist sensitivity, which, owing to its intimacy, is capable of forming arabesque-like surface patterns from the profundities of existence.
Miklós Peternák

The sight of a totalled car is indeed shocking, as the energy of the crash is imprinted in its shape, its creases and distortions. Most of us are probably interested in the underlying story: how did the accident happen, have they survived?
Related by a survivor, the catastrophic moment is slowed down by memory to the extremity of the most minuscule detail, going back to the very beginning of the notable day even, as if they were exploring the relation of cause and effect, their decisions that eventually and irrevocably led to the crash.
In this slow replay, I perceive the very relief of the shock, the “comforting” explanation for the unavoidable crash. The fact that the outcome of this story is predetermined – as indicated by the yes-no questions of the sung inner monologues – is far from comforting, though. The opera genre is intended to convey this tension.
The story begins at a car factory, and thus the story of the car, that is, its “life”, which is ended by the crash, ironically takes the place of human life at some points.
Hajnal Németh

THE FILM
The installation includes a video projection evoking the genre of experimental opera, in 12 acts. The opera librettos are based on stories of real accidents, and in the form of yes-no questions, they describe how people relate to driving, speed, and the car as a fetish object. The singers performing the dialogues appear on the stage of life, improvising tunes, or rather, disharmonies, by interpreting ambient noises as musical motifs. There is no closely coherent narrative across the 12 acts; however, the film is permeated by footages filling the interludes between the scenes: a children’s choir at a sound studio, during the recording of the “Angels’ Song”.

THE CATALOGUE
The exhibition will be accompanied by a two-volume catalogue. The first volume – graphic design by Zsuzsanna Németh – contains studies and provides a summary of the former exhibitions of the installation. The second volume is an artist’s book based on Anna Mándoki’s graphic design, containing the records of the accidents: the librettos. The volumes are available for purchase at the Electa bookshop of the Venice Biennale, as well as via the webshop of Műcsarnok / Kunsthalle.

The authors:
Ivar Frounberg, composer. He was among the first Danish composers to work with interactivity and live electronics. He is active in music politics. In 2000 he was appointed senior professor in composition at the Norwegian Academy of Music in Oslo, Norway.

Gábor Gulyás, philosopher, aesthetician. Editor-in-chief of the journal Határ (1992-1995), director of the Latin Betűk Kiadó publishing house (1995-1998), editor of the periodical Vulgo (1999-2007). He has been teaching philosophy, aesthetics, art history and cultural management at various universities since 1995. From 2006, he was the first director of MODEM Modern and Contemporary Art Centre, Debrecen, and produced many of its shows. Since February 2011, he is director of Műcsarnok / Kunsthalle Budapest, and also national commissioner of the Hungarian Pavilion at the Venice Biennale.

Zoltán Kékesi, literary historian, critic. Research fellow at the Eötvös-Loránd-University, Department of Comparative Literature and Cultural Studies. Since 2008, he is lecturer for Art Theory at the Hungarian University of Fine Arts, Department of Art Theory. He now studies the archival politics of the representation of Holocaust in contemporary art and documentary film.

Emese Kürti, art historian, art critic. Curator of Ernst Museum (2000-2002), museologist at the Hungarian National Gallery (2003–2005). Since 2009, she is on the staff of the of Ludwig Museum – Museum of Contemporary Art. Lecturer at the Hungarian University of Fine Arts. PhD student at ELTE’s Doctoral Program in Film, Media and Contemporary Culture. Her field of interest includes avant-garde and neo-avant-garde art as well as socially critical strategies in contemporary art.

Martin Conrads, artist, author and cultural producer. Lives and works in Berlin. His fields of interest are conceptual art and critical media. In 2001-2002 he was editor for Texte zur Kunst. In 2006/07 he was artistic co-director and co-publisher of the German-Hungarian publication project Die Planung / A Terv. Currently he teaches graphic design at the Berlin University of the Arts.

Miklós Peternák, art historian, curator of the exhibition. He was member of the Béla Balázs Studio (1981–1987) and the Indigo Group. Head of the Intermedia Department at the Hungarian University of Fine Arts since 1991; director of C3: Center for Culture and Communication since 1997. His field of interests include photo- and film history, image theory, as well as the artistic aspects of new, technical media (video, computer). He has produced several exhibitions as well as experimental films and videos.