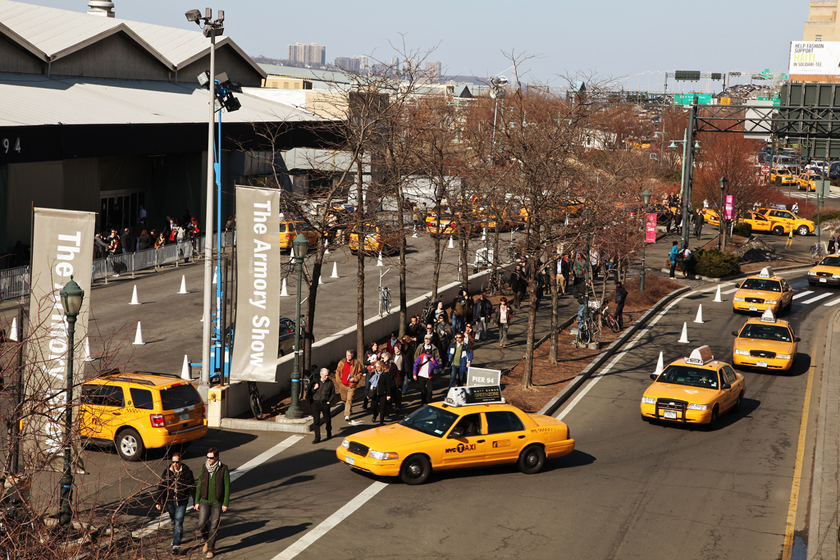 Dynamic Mix of Exhibitions and Programming to be Presented in a Redesigned, Luxurious Space

NEW YORK, NY, January 20, 2012 – The Armory Show today announced the galleries participating in its fourteenth edition, which will take place from Thursday, March 8 to Sunday, March 11, 2012, on Piers 92 and 94 in central Manhattan. A leading international contemporary and modern art fair, The Armory Show is one of the most important annual art events in New York City. The Armory Show–Contemporary on Pier 94 will feature 120 leading international exhibitors, 19 invited exhibitors in Armory Focus: The Nordic Countries, 11 exhibitors in the inaugural edition of Solo Projects and 7 organizations participating in the Not-for-Profit Section. In total, 30 counties will be represented. The Armory Show–Modern, a section dedicated to international dealers specializing in historically significant Modern art, will present 71 exhibitors representing nine counties.

For its fourteenth edition, The Armory Show will inaugurate three exciting programming initiatives. Armory Film, curated by the Moving Image Fair, will feature an international selection of contemporary video and experimental films; Solo Projects, a section dedicated to single artist presentations, will debut on Pier 94 featuring eleven leading young dealers from around the world; and the fair will launch its new Media Lounge where on-site programs including Armory Film, Open Forum, the lively talk series, and Armory Performance will take place. The Armory Show is also introducing a new private VIP hour, offering VIP ticket holders the opportunity to view works, speak to dealers, and walk the floor for one hour daily before the fair opens to the general public.

“This year’s Armory Show is sure to stand out from our past editions, as well as other fairs from around the world,” notes Paul Morris, Founding Director of The Armory Show. “For the 2012 edition, we have taken a new direction for the fair. Most notable is that The Armory Show is now a smaller, more boutique fair that enriches every experience for the many collectors, curators and guests who come to The Armory Show to see the greatest art from around the world. We’ve engaged Bade Stageberg Cox to relay our floor plan with an intrinsic New York flavor, and have improved our amenities – from a top-notch gourmet restaurant and café to comfortable lounges throughout the fair.”

Noah Horowitz, Managing Director of The Armory Show says, “Our exhibitor list truly shines and showcases a thoughtful, curated mix of the leading international dealers. The work on view will enhance the Armory’s mission of presenting new work by living artists, cementing the fair’s longstanding tradition of discovery. It is very exciting to be presenting many of these galleries and their artists for the first time in New York.”

Additional features of The Armory Show 2012 include the work of commissioned artist Theaster Gates who will be featured at Kavi Gupta (Chicago); the eclectic and engaging Open Forum talk series curated by Amanda Parmer of the Whitney Independent Studies Program; the inaugural edition of Armory Film; an acclaimed VIP program and a lively opening night party benefiting The Museum of Modern Art.

The Fund for Park Avenue spring sculpture installation presented by Art Nouveau Gallery will be featured in a special project space on Pier 92 highlighting works by Venezuelan artist Rafael Barrios.

Dates
Wednesday, March 7 for invited guests
Thursday, March 8 – Saturday, March 10 Noon to 8 pm
Sunday, March 11 Noon to 7 pm
Visitors with a VIP pass will also be able to access the fair from Thursday to Sunday from 11 am to Noon.

Tickets
Advance tickets will be available in late-January. Admission tickets will available at the Box Office during show hours. Please visit www.thearmoryshow.com for more information.

The Armory Show is located on Piers 92 and 94 on the Hudson River, Twelfth Avenue at West 55th Street in the Passenger Ship Terminal complex, conveniently located 20 blocks north of the Chelsea Gallery district and just west of Columbus Circle. The piers are easily accessible by public transportation, taxi, and private vehicle. The nearest subway stop is four cross-town blocks east at West 50th Street and Eighth Avenue. Shuttles services are available between The Armory Show on Piers 92 & 94 and VOLTA NY on 34th Street near Fifth Avenue; the Chelsea gallery district at 27th and 11th Avenue; and the Whitney Museum of American Art at Madison Avenue and 75th Street. Please see shuttle schedule outside the fair for departure and arrival times and locations.

Editor’s Note: Please register in advance for press accreditation to The Armory Show by emailing l.pearson@thearmoryshow.com.

JANOS MEGYIK: THE SPACE OF THE IMAGE, LUDWIG MUSEUM - BUDAPEST

PAVILION OF FINLAND AT THE 58TH INTERNATIONAL ART EXHIBITION