After last year’s special Guest of Honour presence, when in honour of Hungary’s EU presidency, as the first among international book fairs, we invited the other 26 member states of the European Union besides Hungary, their belles-lettres book publishing and one author from each country, this year the Guest of Honour will not be a single country either, but the cultural region of the Scandinavian countries, Denmark, Iceland, Norway and Sweden, joined by Finland under the name Nordic Countries. Just like last year, the joint presentation of the Nordic countries involves a gesture of cultural diplomacy as well, as in the first half of 2012 Denmark that is organising this feature is in charge of the EU presidency. The scale and the diversity of the Nordic countries’ literary guest performance is comparable to that of last year’s EU presence: More than twenty reputed Scandinavian and Finnish authors will come to Budapest, and each of them is welcomed with at least one new volume in Hungarian. Hungarian readers will have the chance to meet noted authors like Håkan Nesser from Sweden, Jostein Gaarder and Tina Åmodt from Norway, Janne Teller from Denmark, Leena Lehtolainen from Finland and many others. 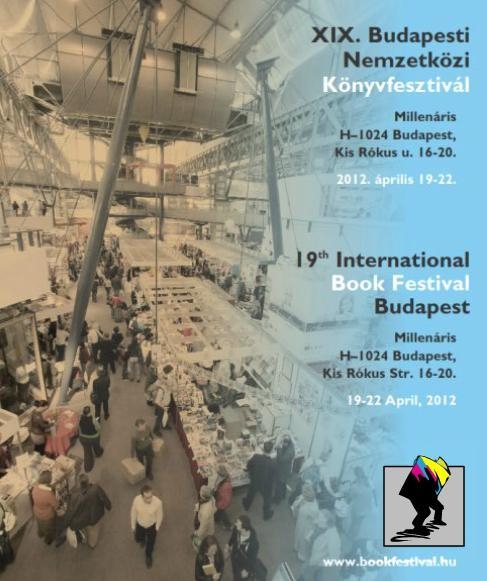 The Book Festival will be opened by Dr Miklós Réthelyi, Minister of the Ministry of National Resources. The welcome address on behalf of the Guest of Honour Nordic Countries will be given by Ms Gunn Karin Gjul, Member of the Norwegian Parliament and Chair of the Standing Committee on Family and Cultural Affairs and Katarina Mazetti Swedish author.

As a tradition reaching back nearly twenty years, the Festival’s Guest of Honour writer is featured on the opening day. World-famous Italian writer Claudio Magris is presented to the audience in Budapest in an on-stage conversation with Péter Esterházy hosted by József Mélyi. This is followed by a laudation by Krisztián Grecsó after which István Tarlós, Lord Mayor of Budapest, will present the Budapest Grand Prize to the Italian writer. Both Európa Book Publishing and Libri Book Publishing have scheduled several new editions for Magris’ visit to Budapest. 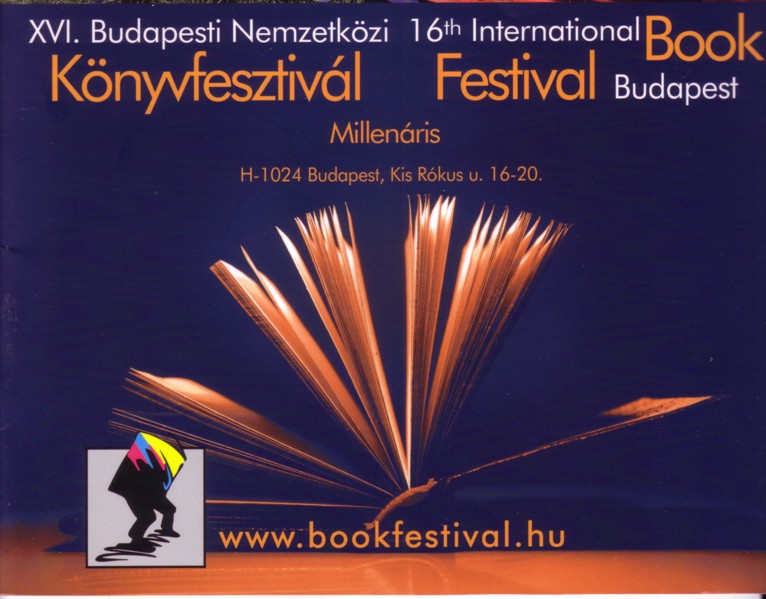 For the twelfth time now, the Budapest book fair hosts the European First Novel Festival, a joint presentation of the continent’s most talented young prose writers. It started out as an EU literary event, but by now is attended not only by authors from the Community, but, as this year, for example, by one first-volume writer each from Croatia, Switzerland and Turkey. At this literary festival of considerable international prestige Hungary is represented by Péter Gerőcs this year. As in the nearly twenty years of the Book Festival, the exhibiting countries and the Hungarian publishers, too, invite their authors so that writers from nearly all countries of Europe attend the event on the occasion of the publication of the Hungarian editions of their new books.

Apart from the Nordic countries with their imposing Guest of Honour stand, Romania, Russia, Saudi Arabia, China, Spain, Slovakia, Italy, Brazil and, after several years of involuntary absence, Germany – as a cooperation of the Frankfurt Book Fair and the Budapest Goethe-Institut – will present a rich choice of its book production. Despite the crises hitting both the international and the Hungarian book market that has been lasting for years, the space rented by international, domestic and Hungarian publishers from the neighbouring countries has not decreased; the stands again occupy an area of more than 1500 m2.

As opposed to most book markets in the world, in Hungary this is not the only book fair where the players of the book industry and readers can meet. As the Book Festival is followed by the Festive Book Week taking place only one and a half months later, an event consisting of programmes all over the country looking back on a history of more than 80 years that features contemporary Hungarian literature, the Festival aims to provide a comprehensive overview of Hungary’s book production. Domestic enterprises and Hungarian book publishers from the neighbouring countries schedule their major new ventures and, in view of its international character, also their world literature projects for the Book Festival. From the start, the organiser of the Book Festival, the Hungarian Publishers’ and Booksellers’ Association, meant to address the Hungarian book-loving audience, as a result of which the halls at the Millenáris as well as its park, as opposed to most book fairs in the world, operate as a huge bookshop during the four days of the Festival. The entrance tickets available for 500 forints are in fact a means of attracting visitors, as the amount can be cashed in full for buying books at any Hungarian stand.

It was not by chance that we called our book fair a festival, as from its opening on Thursday noon until its closing on Sunday evening it offers a wide variety of programmes. The more than 350 programmes listed in the programme booklet include on-stage conversations, book presentations, writers’ portraits, concerts, film presentations as well as exhibitions and theatre premieres. This year, the Festival is enriched by an exceptional variety of exhibitions. Apart from the two exhibitions by the Nordic countries (one of which commemorates Henrik Ibsen), Israel offers a beautiful exhibition of children’s book illustrations, and Napvilág Publishing hosts Roma Holocaust, an exhibition of photographer Jutka Rona who lives in the Netherlands. One of the most spectacular and largest-scale exhibitions is Objections, an overview of the history of the Peace Prize of the German Book Trade , presented by the Börsenverein des Deutschen Buchhandels, the trade organisation of the German book trade. As three former winners of the prize, Claudio Magris, György Konrád and Péter Esterházy will be attending the Book Festival, they will jointly open the exhibition in the evening of the opening day. And finally, our partners of long standing, the Hungarian Illustrators’ Society and the Hungarian Book Artists’ Society, will present their latest exhibitions.

Every year, we proudly emphasise the international character of our event, the Festival presenting young writers as a result of European collaboration, the world-famous authors visiting Budapest, the quality of Hungarian translations, the openness towards world literature, and the material exhibited by the European and overseas countries that are justly proud of their book production, but the April Book Festival is primarily a platform for presenting Hungarian language book culture. Two thirds of the nearly five hundred stands at the Book Festival are rented by Hungarian exhibitors, and since the change of regime (1989), we promote the integration of Hungarian publishers from the neighbouring countries into domestic and international book culture by providing a stand for each of these regions free of charge. The Festival’s visitors can meet more than 400 Hungarian writers, scientists, artists and persons of public life from Hungary and the neighbouring countries and have books signed by them. Although the Book Festival cannot measure up to the several hundred book signing opportunities of the Festive Book Week, it is still a place for fans to meet the cream of Hungarian authors from Sándor Csoóri to Anna Jókai, from László Darvasi and János Lackfi to Sándor Kányádi, from György Dragomán to László Krasznahorkai, from Péter Esterházy and László Márton to Miklós Vámos, and from Béla Markó to Géza Szőcs at the book signing table.

The XIXth International Book Festival Budapest occupies the whole of the Millenáris. The largest-scale events take place at the Teátrum, the two levels of the largest hall – the name of which changes from Jövő Háza to Building B – host the book stands, and in the nine programme halls of different sizes that are named after respected personalities of Hungarian book publishing and literature, visitors can attend a variety of simultaneously organised programmes. Alongside the Millenáris pond, there will be an arrangement of pavilions creating the atmosphere of an open-air book fair. At the Open-air Theatre of the Millenáris, hopefully in fine weather, the audience will have the opportunity to enjoy poetry-based concerts by the Kaláka Ensemble and the Kávészünet Ensemble. As in previous years, the most visited area is likely to be the Children’s Lit Kingdom jointly organised by the Hungarian children’s book publishers, as it offers a large variety of programmes: readings, puppet shows, story-telling, playhouse events, concerts, dancing, and, of course, book presentations providing the overall framework, which are all very popular with families with small children.

As it appears from the above, the Book Festival – as suggested by its name – is primarily a cultural event. But it is also the major professional forum of the players of the Hungarian book market. As an unparalleled feature it includes the Librarians’ Club mobilising more than 2000 librarians that has been an integral part of the Book Festival since its launch, the programmes of which focus on the digital preservation of our intellectual heritage. Another current topic, e-book publishing, is discussed at the conference jointly organised by the Börsenverein des Deutschen Buchhandels and the Hungarian Publishers’ and Booksellers’ Association.

The more than 300 novelties, the many international and Hungarian guest authors and the 350 cultural programmes presenting and promoting the works and their authors are more than enough reason to provide book lovers with the most comprehensive information possible. Information on the participants and the programmes of the Festival can be found on our website at www.bookfestival.hu. In addition, the daily Népszabadság, the weekly Heti Válasz, the cultural weekly Élet és Irodalom and the Hungarian Lettre Internationale will publish special issues. In cooperation with the book industry monthly Új Könyvpiac, we will publish the catalogue of the novelties scheduled for the Book Festival both in print and online, and novelties will be marked at the stands with special bookmarks. From its studio set up at the Book Festival, the public service Hungarian Radio will cover the event in several programmes every day, and to those looking for information on the Festival’s programmes online, we recommend the reports on the literary and cultural sites litera.hu and prae.hu.

On the closing day of the Book Festival, we will present the Publisher of the Year and the Municipal and Regional Bookshop of the Year awards, based on the secret voting by the members of the Hungarian Publishers’ and Booksellers’ Association.

On the same day, Dr Zsolt Láng, Mayor of the IInd District of Budapest, will present the Buda Prizes for the book, CD or audiobook best serving the purposes of education. During the Festival, visitors can vote for the Audience’s Award of the Most Beautiful Hungarian Book Contest, which will be presented on 7 June, the opening day of the Festive Book Week.