A new international exhibition, under the striking title “It’s the Political Economy,
Stupid” will be hosted at the Contemporary Art Center of Thessaloniki (Warehouse B1, Thessaloniki port area, Greece), from June 27 till September 30, 2012 (opening: Wednesday, June 27, 20:30. Opening hours: Tuesday-Saturday 10:00-18:00). The exhibition is curated by Oliver Ressler and Gregory Sholette.

The curators, Oliver Ressler and Gregory Sholette, mention in their statement: “Globalization, privatization, flexible work schedules, deregulated markets; 30 years of neoliberal capitalism has driven most of the world’s governments to partly or wholly abandon their previous role as arbitrators between the security of the majority and the profiteering of the corporate sector. It comes as no surprise therefore that when problems in the US real estate and financial sectors resulted in a global financial crisis starting in 2008, governments all over the world pumped trillions of dollars into banks and insurance companies, essentially creating the largest transfer ever of capital into the private sector. One argument often cited for this unprecedented action was that
many of these transnational corporations were ‘too big to fail.’ Still, despite these enormous expenditures millions of people soon lost their homes and livelihood, and the economic and social damage has not yet ended. The cost of these bailouts is staggering. States borrowed capital to rescue financial institutions resulting in growing national debt and virtual insolvency for some countries. Managing these budget deficits might have been possible if wealthy transnational corporations were forced to assist the economy, but neoliberal governments instead chose to introduce belt-tightening programs that radically reduce public services and social welfare.

Needless to say, these austerity measures do not necessarily reflect the will of the majority, and increasing voter apathy is one serious side effect of such top-down decision-making.

Today, we are facing a catastrophe of capitalism that has also become a major crisis for representative democracy. The very idea of the modern nation state is in jeopardy as the deterritorialized flow of finance capital melts down all that was solid into raw material for market speculation and bio-political asset mining. It is the social order itself, and the very notion of governance with its archaic promise of security and happiness that has become another kind of modern ruin. Theorist Slavoj Žižek puts it this way, ‘the central task of the ruling ideology in the present crises is to impose a narrative which will place the blame for the meltdown not on the global capitalist system as such, but on secondary and contingent deviations (overly lax legal regulations, the corruption
of big financial institutions, and so on).’ [1]

It’s the Political Economy, Stupid [2] brings together a group of superlative artists who focus on the current crisis in a sustained and critical manner. Rather than acquiesce to our current calamity this exhibition asks if it is not time to push back against the disciplinary dictates of the capitalist logic and, as if by some artistic sorcery, launch a rescue of the very notion of the social itself.”

Syrago Tsiara, Director of the Contemporary Art Center of Thessaloniki comments, on the occasion of the exhibition: “The Contemporary Art Center of Thessaloniki, serving its role as a field crossing various perception and practices that concern contemporary art and its relation with the society, invited the curators Oliver Ressler and Gregory Sholette to present the exhibition It’s the Political Economy, Stupid to the Greeks, after its presentation at the Austrian Cultural Forum in New York and before its presentation at the Pori Art Museum in Finland, in spring 2013. The issues raised by the exhibition, the financial system crisis and its results in everyday life, are of direct interest in Greece, since it is widely believed that from Greece started the experiment in European soli of capital redistribution, breaking down working assets and welfare structures, and total subjugation of the politics to the capital powers.

The exhibition is realised with few funds, in a period when the social crisis and the social-political uncertainty culminate, but managed to gather from the very first beginning, great interest and response. It is also realised thanks to the assistance, solidarity and volunteers’ work by institutions, collaborators and friends it is also realized thank to the professionalism and devotion shown by the SMCA staff, along with the support shown by the Board of Trustees which allows us to continue our work in times of unfavorable circumstances.”

The video subtitling was made n a voluntary basis by the students of the Audiovisual translation and subtitling seminar realized in OXYGONO, (February – April 2012).
Coordinator: Katerina Gouleti
Team: Ilectra Athanasiou, Nicoletta Karida, Christina Pessiou, Anatoli Stavroulopoulou, Nina Zwe
OXYGONO (<oxygene in english / www.oxygono-metaixmio.gr) is a space inaugurated in 2012 by METECHMIO Publications in Thesslaoniki. OXYGONO organises seminars and workshops for adults related to books, education and culture, reading clubs and various events for young and mature booklovers.

Parallel programme events
A parallel events programme has been scheduled, on the occasion of the exhibition “It’s the Political Economy, Stupid”. In detail:

27.06-30.09 @ CACT project room
Projection of the documentary Thinking in the age of the monsters (Production – Direction Giorgos Keramidiotis)

1,15,29.09 @ CACT
Guided tours by the coordinators of the exhibition Areti Leopoulou & Theodore Markoglou 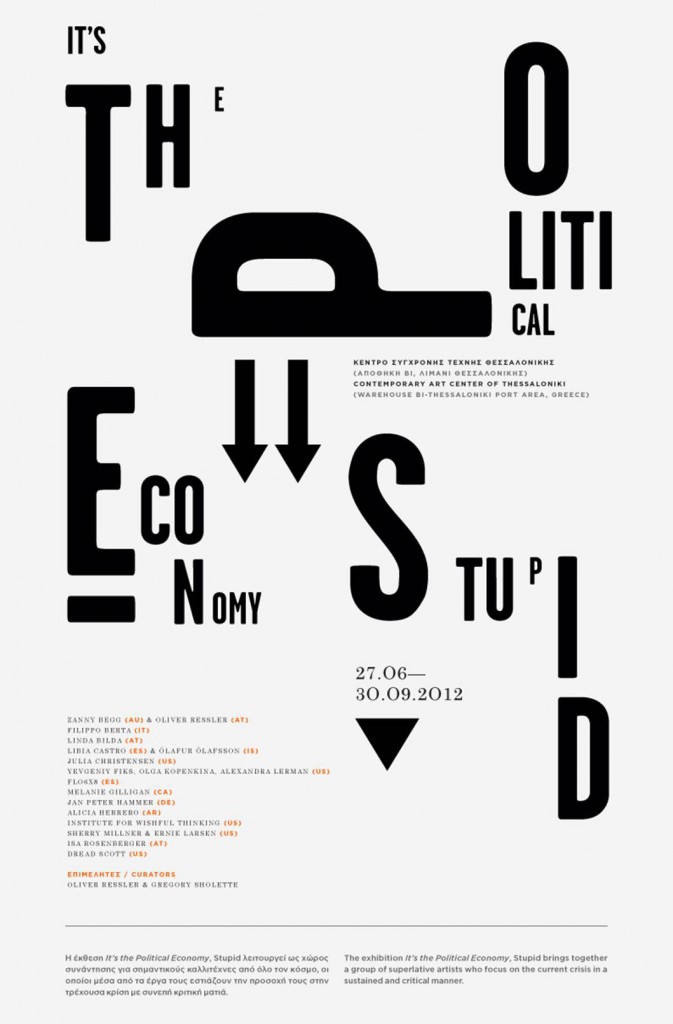