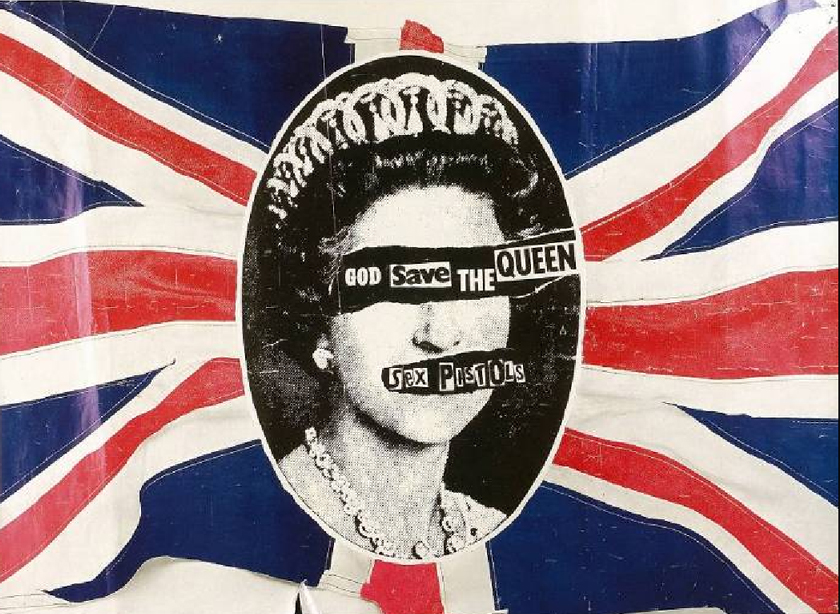 Text by Vittoria Biasi – All Texts are 1F mediaproject copyright. All Rights Reserved.

Inside the EUROPUNK Exhibition. The Punk cultural vision in Europe during the years 1976-1980.

Eric de Chassey director of  the Academy of France at Rome proposes a trip into the artistic movements during the seventies which brought through alternative, transversal and out of a tradition  languages, a tingle of vitality among countries like United Kingdom, France, Germany, Switzerland, Italy and Netherlands.  The exhibition begins with the Sex Pistols television debut during 1976 first official show date for the Punk movement through the programme So It Goes for the Granada Television of Manchester –– and finishes with the first passage on BBC of Joy Division during 1979. The exhibition is realized with the cooperation of Fabrice Stroun independent curator associated to the young Museum MAMCO of Geneva which will welcome the exhibition. The project, unusual in the exhibition scenery, is a chance to expand and revise on subjects, to remind figures and events which connoted that period introducing the characters and the anarchism that have proliferated some derivative cultures such as the Psychobilly* who applied plasters to their fingers to play contrabass.

The Punk culture is  seen  onto the ideological background of the objections and of the new avant-garde artistic movements, what they have not realized or not expressed or even deceived. Peter Bürger and Catherine Millet point at the radical concept of the historical avant-garde in pursuit of shifting the artistic experiences in the life of every days. Their action is regained by the avant-garde artists which don’t develop the interaction of the art with the new audience except for Yves Kleine and Piero Manzoni. The judgement of historians that have celebrated the object is extended to the Pop Art and the Nouveau Realisme movements. The emerging  mass cultures of the modernity which are reconfiguring new systems, are even farther away of the fundamental problems attaining the creativeness in the conceptual art. The years after the war witness the reaffirmation of  nationalist ideologies, of traditional identities translated by Fluxus**into a short-circuit, into a cataclysm of new creative experiences. From the awareness of a contrast between the ideology of the creative act and the reality of some systems, from a desire to express the genuineness of a social thought, an artistic gesture, an elitist genuine culture rush in, marginal aspect in connection with the sorrowful official character. The colours, the look, the black, the studs, the icons, the piercings, the pins, the make-up, (Punk fashion which some stylist will take inspiration from) are the coordinates of a new culture by which the groups appeal to the public hymning I’m an Antichrist, I’m an anarchist!

The Punk messages are aggressive in refusing the social patterns and are a radical expression of problems and system unevenness: no dog’s body!!!  Kill the poor is the challenging title of the Hardcore Group’s song  coming from San Francisco, Dead Kennedys during 1980.

Introducing the catalogue, the Director points out the lack of attention between the marginality of some visual creativities and the worldwide fame for the music of Punk Groups which have proposed with remarkable originality an artistic performance to break with any concept of fashion, style, tradition. The musical history of Punk Groups has been in the glare all over Europe and United States through literature and Internet. The images divulged by different media, fit in the exhibition projects  for the strong visual impact, have been considered as an art somehow different. The Punk music has been able to negotiate the traditional language barriers and spread its message out and the active and open people welcomed the emergent expressions during those years. Villa Medici underlines the Punk merits as a form of art through the objects to be seen and understood, and the Punk culture can be considered a primary form of art interconnecting larger creative  forms among visual art, music and performance for its lust to research and for its vitality.

The curators reorganized the period into eight sections, pointing out the events, the production and the characters that founded the groups. The Sex Pistols, Bazooka, D.I.Y., N.P.A., A., Gap, WTF, NW, are the expressions of a movement determined to make a clean sweep of the past in order to get the cultural reform relieved. The famous manifesto realized by Jamie Reid is shown for the Sex Pistols with the face of the Queen crossed by the title of the song God Save The Queen. The culture Punk rebellion takes on a painstaking global style everywhere in the world, of correspondence between the appearance and the being, between the being and the result. The history of the Sex Pistols is an example whose imagine has been made with care by recently deceased Malcom Mc Laren and by his wife Vivienne Westwood. In France the Bazooka have had a different course. The group originated from Parisian Fine Arts  students which loved the comic-strip and started their contribution with “Liberation”. The Group is constituted by Olivia Clavel, Lulu Larsen, Kiki and Loulou Picasso, Bernard Vidal and later the Ti5-Dur and Jean Rouzaud. After 1980 the members keep working individually. The third section of the exhibition is dedicated to the Group D.I.Y. and their peremptory “do it yourself”, with the creation of images doomed to a wide diffusion without a traditional format of communication.

The Punk phenomenon has been musically historicized by Jerry Goossens a member of the Hollander punk movement and by Jon Savage who composed the well-known England’s Dreaming: both offer their contribute to the exhibition catalogue. According to the curators the Punk project is reflected in the four artists simultaneous nature of their site-specific works: Francis Baudevin, Stéfane Dafflon, Philippe Decrauzat and Scott King, the graphic designer, authors of an abstract and geometric painting.

(*) It is a musical genus mixing different types of Punk Rock, Rockabilly and others. It is characterized by texts which deal with horror, violence, sex and similar considered taboo. The bass guitar which is typical for rock orchestration is often replaced by the contrabass (Wikipedia)

THE CATALOGUE
The exhibition EUROPUNK will be accompanied by a catalogue published in three languages (French, Italian and English) by Drago, with essays by Éric de Chassey, Jon Savage, and Jerry Goossens, complemented by facsimiles of fanzines and hundreds of images.

Under the patronage of France’s Ministry of Culture and Communications