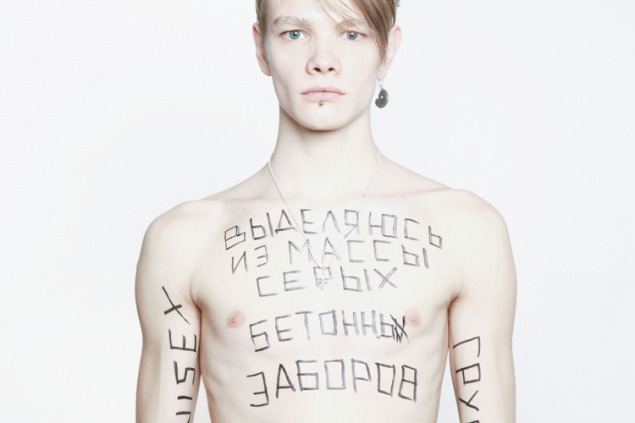 The problems of youth subculture have rarely been raised in Russian contemporary art, at least since the nineties, with the exception of graffiti, which is usually discussed from a commercial viewpoint, as a decorative urban visual culture. Alina Gutkina has been the sole Moscow artist to raise this topic, which she has done by researching the psychology and gender issues within the underground community – the radical youth and teenage scenes – in the city’s bedroom communities. As a longtime insider within the Moscow hip-hop and graffiti scenes, Gutkina produces art about the people in her milieu.

Position the cursor on the images to view captions, click on images to enlarge them.

In her previous projects (Prosecutor, Heads, Shootings), Gutkina explored the repressive power exercised by law enforcement authorities, the obvious principal enemy of subculture society. In the project that followed, Model Building, and subsequently in Blackholes and Stencil, the artist described the effects of capitalist power on the urban environment, the massive encroachment of so-called development on the architectural and historical fabric of a centuries-old megalopolis and how the steady decay of graffiti culture has been linked to the destruction of the original urban landscape. Passing through the prism of personal experience, Gutkina’s art has gradually reached the level of a full-blown categorical imperative. In the subsequent projects Dead Wife’s Lullaby, Tights, and Mundan, the artist’s feelings and experiences, which she uses to diagnose the gender catastrophe of the subculture, became formative elements. These three works served as an important stage of preparatory research for Gutkina’s biggest project to date – Industry of Trendy Boys. This project also deals with power, of course: in this case, as the title suggests, the power of the fashion industry and mega-corporations, and how they have contributed to the destruction of the subculture.

Meditations on gender identity and sexuality within the subculture caused Gutkina to reflect on the catastrophe that has unfolded within it during the past several years worldwide, including in Russia. The radical graffiti scene has begun to grown younger and “manlier” right before our very eyes. Femininity (in its traditional guise) has retreated from this community, and sexual relations within the subculture have been replaced by a cult of masculinity, albeit a masculinity that is quite fragile, tender, and ambivalent by virtue of the young age of its practitioners. To fit into this subculture, young women have begun to resemble young men. This youthful, manly, fascistoid, and closed counterculture has succeeded the previous model of the graffiti movement – anarchic, disorderly, and centered around resistance. These people have even acquired their own name – “baggers” (from the English “bags,” for baggy pants). This is the most radical segment of the hip-hop underground, a kind of graffiti-Jugend. And it is these young men who have become the most fashionable and desirable objects of the street-fashion industry worldwide. It is they who shape the behavior of the new generation, while at the same time serving as an object of consumption on the part of the older generation. Turning outward appearance into a key element, they have substituted a closed escapism for the ideology of resistance, demonstrating in the process a parade of brilliant, aesthetically polished decadence. Exposure of the idea has led to a rejection of the struggle. By becoming objects and rejecting their own subjectivity in favor of an aesthetically attractive, empty form, these brilliant ruins of the radical community decisively confirm disenchantment with the original, integral subculture and lend themselves to commodification, to mass self-production.

In this project, “exposure” of the idea is understood literally. The uniform of the new decadence is alternative street fashion, where brands and corporations occupy the foreground. The industry has tasked itself with diffusing subculture, with transforming it into a popular “grand style of the streets.” Here we see the borderline between generations, the boundaries of a new culture. As it comes out of the underground and moves into the masses, resistance becomes a commodity, albeit one of the most greatly desired and advanced commodities in our contemporary age, a marker of one’s membership in an erstwhile cultural avant-garde.