CURVATUREROMANCE is the first museum presentation of the large-format metal sculptures completed during the last four years by the American artist John Chamberlain (*1927). The show also marks the start of the AMERICAN SUMMER program in the Pinakothek der Moderne.

As early as the late-1950s Chamberlain created a sculpture for the first time that made use of colored steel parts from a car that was in the backyard of his friend Larry Rivers.

He thereby found his Carrara – a working material that was to become as natural for Chamberlain, as marble was for sculptors of the Renaissance. Hammer and chisel were replaced by a scrap metal press which the artist uses – still, to this day – to compress and stretch, fold and bend his material, assembling the individual parts piece by piece, in a process of adding-on and taking-away again, until “it fits” (JC). Chamberlain thus transforms industrial material and design into a radical creative language. In so doing, his sculptures represent a formal contrast to the restrained and geometrically articulated Minimal Art of the same period, the serialized and systematic approach of which can be seen parallel to this in major works by Donald Judd, Dan Flavin and Fred Sandback in the Pinakothek’s permanent collection.

Chamberlain’s sculptural work, however, can be seen in a much wider historical context. His compression of metal parts creates folds, which interact with the dynamic lines in the sculpture as a whole. The psychological charging of sculptures in such a way allows comparisons to be drawn, in particular, with the folds in material found in earlier works in the history of art. The parallels described in the catalog essay between Chamberlain’s works and selected, examplary sculptures ranging from the Middle Ages and the Baroque up to one of Auguste Rodin’s major works, show how the artist’s work represents a logical continuation and renewal of a central line of development in western art. 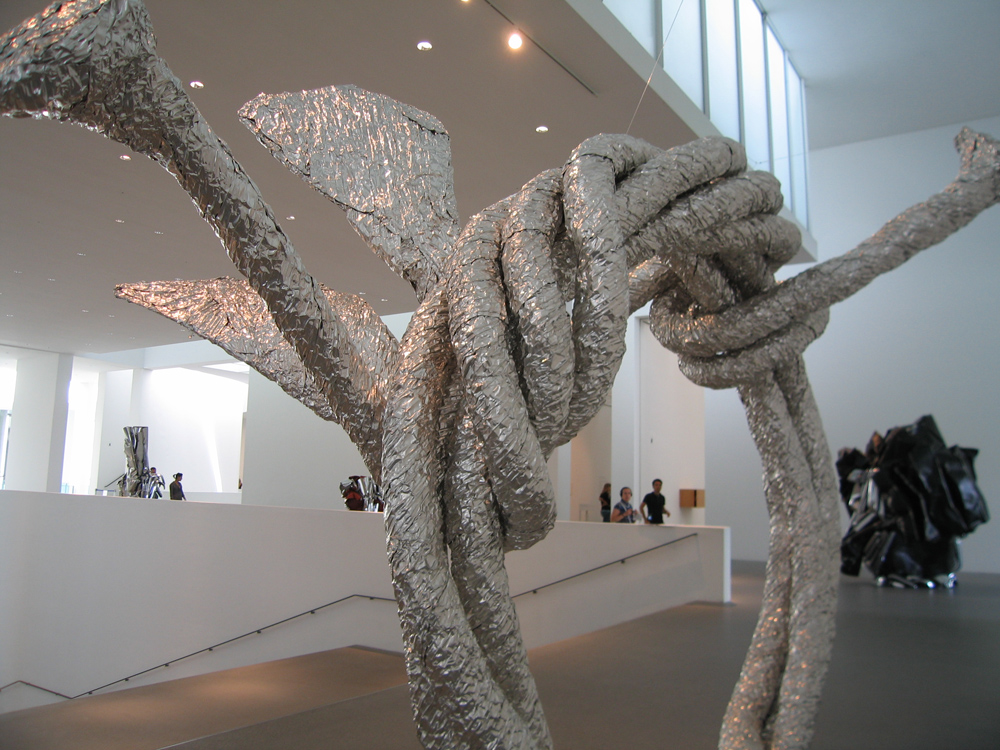 In the twelve sculptures especially chosen for the Munich exhibition, some of which rise to a towering five meters, Chamberlain has successfully taken a further step in perfecting the expressiveness of his sculptural oeuvre, while continuing to increase their density and presence. In his almost unprecedented creative output and with a lightness that appears unforced, Chamberlain enters into an open dialogue with the recalcitrant material and, for that very reason, is able to provide it with a suggestive liveliness. In the process, his impulse to work from intuitive and improvised compositional moments is combined with the inclination to not be fully in command of material and form: “The resistance of that metal, the molecular structure, has a great deal of compatibility with people,” the artist once said in an interview.

An exhibition catalog with numerous illustrations and a text by Corinna Thierolf, Chief- Curator in the Sammlung Moderne Kunst, Pinakothek der Moderne, will be published.

For further information about the exhibition JOHN CHAMBERLAIN. CURVATUREROMANCE and about the AMERICAN SUMMER program visit our website at www.pinakothek.de/pinakothek-der-moderne/

RECORD PRICES AT DOROTHEUM - 2011: BEST SPRING SEASON IN THE HISTORY OF THE AUCTION HOUSE