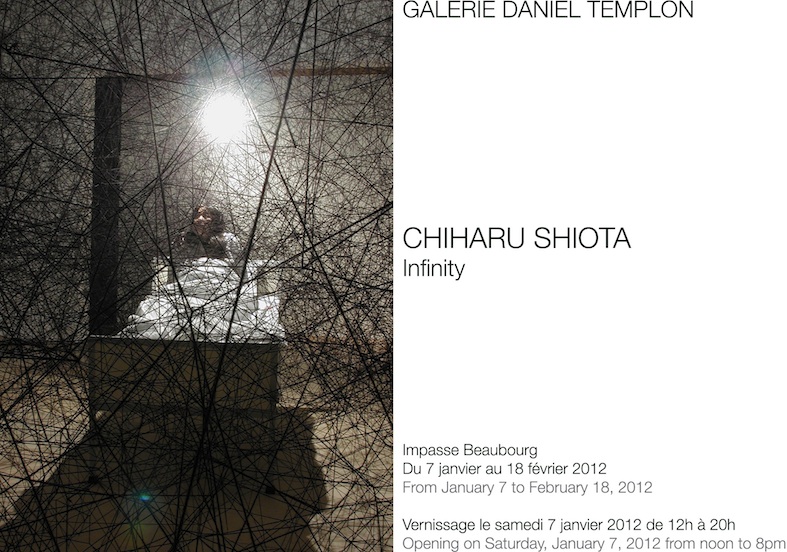 In the wake of her widely noted exhibition at the Maison Rouge in spring 2011, artist Chiharu Shiota is returning to Paris to exhibit at Galerie Daniel Templon. She will be showing a monumental installation designed especially for the gallery’s Impasse Beaubourg space.

Chiharu Shiota combines performance, body art and installations in a process that places the body at the centre of her sculptural work.

She studied with Marina Abramovic in Hamburg in the 1990s. Her artistic language was influenced by pioneering artists Louise Bourgeois, Eva Hesse and Ana Mendieta, both in terms of physical experimentation and the focus on the unconscious, and the choice of delicate materials like fabrics and thread, traditionally associated with femininity.

Chiharu Shiota began creating her series of installations made of tangled threads in 1996. The installations turn the work of art into an extension of her own absent body, mirroring a spider’s web.

These objects are floating and liberated from their primary purpose, conjuring up poetic and moving images for the viewer. They call forth memories and emphasise absences.

“I feel there is something common between the silence of the burnt piano and the silence on my way home, and that this is deeply hidden in my heart,” reveals the artist.

The graphic network that connects the elements invokes the power of interpersonal bonds, the subject’s inevitable dependency on her or his roots, the very relationships that are harmed by the individualism of modern Western culture.

“The threads are interwoven into each other. Get entangled. Are torn apart. And disentangle themselves. It is like a mirror of feeling,” writes Chiharu Shiota.

Chiharu Shiota has performed and exhibited extensively, including at Brittany’s Domaine de Kerguéhennec in 1997, the Kunstmuseum in Bonn in 2000, Lille’s Eglise Sainte Madeline in 2004, Berlin’s Neue Nationalgalerie in 2006 and Osaka’s National Museum of Art in 2008.

The artist took part in the most recent Venice Biennial, exhibiting the Memory of books installation at the Gervasuti Foundation. Chiharu Shiota also designed the set for Matsukaze, the Japanese opera directed by Sasha Waltz and performed in Brussels at the Théâtre royal de la Monnaie and in Berlin at the Staatsoper in 2011.

THE PEGGY GUGGENHEIM COLLECTION ENDS THE YEAR WITH OVER 400,000 VISITORS