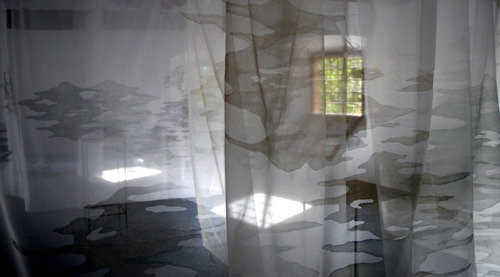 Base Gallery is pleased to present “The way down to the sky -il modo di scendere al cielo-” a solo exhibition by Kaori Miyayama.

Miyayama pursued her studies of cultural anthropology at Keio University, Tokyo and subsequently completed MFA in painting at The Academy of Fine Arts of Brera, Milano, Italy. Ever since her visit to Italy in 2001, she has been proactively working on various styles of expressions and has participated in numerous exhibitions and workshops over the past 12 years in many countries with a focus on Italy.

Among her artworks, there are practices named between Here and There and between Inside and Outside. Miyayama daringly chooses the filtered technique “print” for her expression, and by applying this method she keeps a slight distance from the “frame”, the system of enclosing an artwork.
In addition, she avoids presenting her practices viewed only from a fixed perspective. It almost seems as if she keeps definite punctuation evaded mellifluously while holding back affirmation.
The uncertain places such as the interstice, in other words, the in-between sway freely and moderately without being figured out where the face and the reverse are. Miyayama finds out something invisible in this unseen space-time dwelling between things and makes an attempt for expression.

In a lifetime we are under a siege of conflicting pictures such as truth and falsehood, front and back, and heaven and earth, and explicit expressions actually do not tell anything. We naturally end up learning such ideas in our less tidy life.
Thrusting into a throng of people in the society after having studied cultural anthropology, Miyayama, with the acquisition of the means for expression, seems to have ordinarily come to think that everything lurks in the gloom of contradiction and contrariety after all and realizes that to express is to go along softly.
Passing through the moderately wavering draped cloths, one would feel and experience a indescribable and inenarrable beauty and begin to dawn on being surrounded by the warmth her expressions possess.

This is her first exhibition in Japan in a long time while she has been broadening her activities worldwide in the last decade. We cordially invite you to join us for her first solo exhibition at Base Gallery.