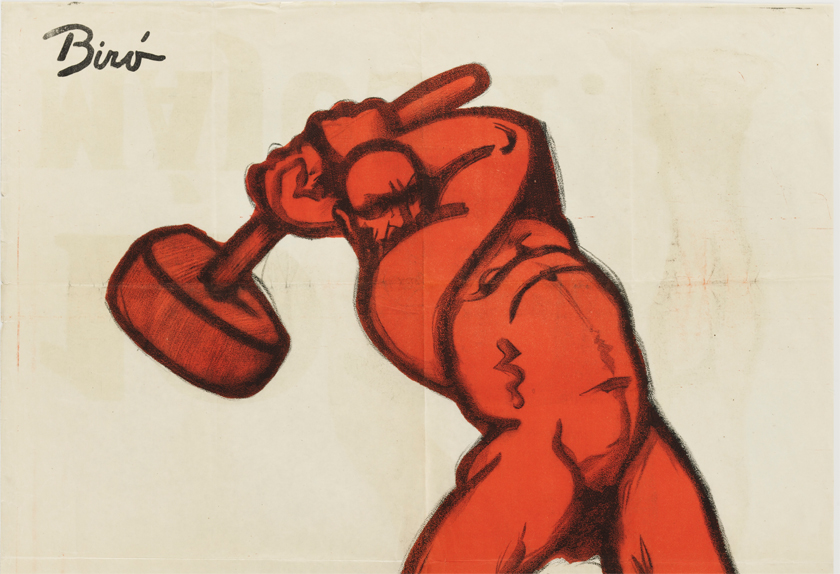 NEW YORK, December 15, 2010—In the wake of the First World War many artists and writers were seized by a new sense of political purpose. It is widely recognized that the events of 1917 and after galvanized revolutionary aspirations among European avant-gardes and the intelligentsia. Seeing Red: Hungarian Revolutionary Posters, 1919, an installation in MoMA’s
Philip Johnson Architecture and Design Galleries, featuresposters by three of Hungary’s foremost graphic artists, Mihály Biró, Sándor Bortnyik and Bertalan Pór, all of whom had been actively involved in the Socialist revolutionary movement that culminated in the short-lived Hungarian Republic of Councils in 1919. The Hungarian publishing, news, and film media were all centered in Budapest, and these posters, composed with dynamic, expressive figuration, became  potent medium for influencing popular opinion. In particular, Biró’s red-hammer-wielding man became one of the most well-known political images of the period, much repeated in Central European political iconography up to the present day. Fleeing from the right-wing backlash that followed the collapse of the Bolshevik revolution, the majority of Budapest’s cultural avant-garde sought refuge in cultural centers like Vienna, Moscow, and Berlin. The installation is organized by Juliet Kinchin, Curator, and Aidan O’Connor, Curatorial Assistant, Department of Architecture and Design, The Museum of Modern Art.
Press Contact: Daniela Stigh, 212-708-9747 or daniela_stigh@moma.org

THE CLOWN OF THE CLOWNS, DAVID LARIBLE, TEATRO VITTORIA | ROME