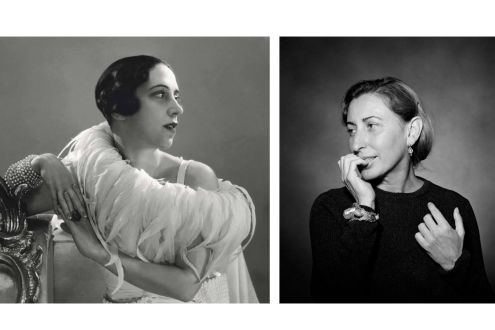 The spring 2012 exhibition organized by The Costume Institute of The Metropolitan Museum of Art is Schiaparelli and Prada: Impossible Conversations.  The exhibition, on view from May 10 through August 19, 2012 (preceded on May 7 by The Costume Institute Gala Benefit), explores the striking affinities between these two Italian designers from different eras.  Inspired by Miguel Covarrubias’s satirical “Impossible Interviews” for Vanity Fair in the 1930s, curators Harold Koda and Andrew Bolton orchestrate conversations between these iconic women to suggest new readings of the designers’ most innovative work.

The exhibition is made possible by Amazon.

“Given the role Surrealism and other art movements play in the designs of both Schiaparelli and Prada, it seems only fitting that their inventive creations be explored here at the Met,” said Thomas P. Campbell, Director and CEO of The Metropolitan Museum of Art.  “Schiaparelli’s collaborations with Dalí and Cocteau as well as Prada’s Fondazione Prada push art and fashion ever closer, in a direct, synergistic, and culturally redefining relationship.”

To celebrate the opening of the exhibition, the Museum’s Costume Institute Benefit takes place on Monday, May 7, 2012.  For the first time in its history, red carpet arrivals will be live streamed from 6:30 to 8:30 p.m. on metmuseum.org, amazon.com/fashion, and vogue.com.  The evening’s Honorary Chair is Jeff Bezos, Founder and CEO of Amazon.com.  Co-Chairs are actress Carey Mulligan, designer Miuccia Prada, and Anna Wintour, Editor-in-Chief of Vogue.  This fundraising event is The Costume Institute’s main source of annual funding for exhibitions, acquisitions, and capital improvements.

The exhibition is organized by Harold Koda, Curator in Charge, and Andrew Bolton, Curator, both of the Met’s Costume Institute.  Film director, screenwriter, and producer Baz Luhrmann is the exhibition’s creative consultant, and has created a series of filmed elements for the exhibition. The production design for the films is by Luhrmann’s longtime collaborator, Catherine Martin. The exhibition design is realized by Nathan Crowley, who serves as production designer (he was creative consultant for the Met’s exhibitions Superheroes: Fashion and Fantasy and American Woman: Fashioning a National Identity).  All mannequin head treatments and masks are designed by Guido Palau.

The design for the 2012 Costume Institute Gala Benefit is created by Crowley and Raul Avila (who has produced the Benefit décor since 2007) with Luhrmann as creative consultant.

The Exhibition
In the galleries, iconic ensembles by Schiaparelli and Prada are presented alongside short videos of simulated conversations between the two designers directed by Luhrmann, focusing on how the women explore similar themes in their work through very different approaches.

“Juxtaposing the work of Elsa Schiaparelli and Miuccia Prada allows us to explore how the past enlightens the present and how the present enlivens the past,” said Koda.

“The connection of the historic to the modern highlights the affinities as well as the variances between two women who constantly subverted contemporary notions of taste, beauty, and glamour,” added Bolton.

The exhibition, in the Metropolitan Museum’s first-floor special exhibition galleries, features approximately 100 designs and 40 accessories by Elsa Schiaparelli (1890–1973) from the late 1920s to the early 1950s, and by Miuccia Prada from the late 1980s to the present, drawn from The Costume Institute’s collection and the Prada Archive, as well as other institutions and private collections.  Eight short videos created by Luhrmann, in which Prada talks with Schiaparelli, who is played by actress Judy Davis, animate the entry gallery and the seven themed sections of the exhibition and provide the thread that connects the objects.  In the films, “Schiap” and Prada are seated at a dining table in dialogue that has been created using paraphrased excerpts from Schiaparelli’s autobiography, Shocking Life, and Prada’s filmed remarks.  Visitors will have the impression of eavesdropping on a fantastical meeting of two great fashion minds.

The section of the exhibition entitled “Waist Up/Waist Down” looks at Schiaparelli’s use of decorative detailing as a response to restaurant dressing in the heyday of 1930s café society, while showing Prada’s below-the-waist focus as a symbolic expression of modernity and femininity.  An accessories subsection of this gallery called “Neck Up/Knees Down” showcases Schiaparelli’s hats and Prada’s footwear.  “Ugly Chic” reveals how both women subvert ideals of beauty and glamour by playing with good and bad taste through color, prints, and textiles.

“Hard Chic” explores the influence of uniforms and menswear to promote a minimal aesthetic that is intended to both deny and enhance femininity.  “Naïf Chic” focuses on Schiaparelli and Prada’s adoption of a girlish sensibility to subvert expectations of age-appropriate dressing.  “Classical Body” explores the designers’ engagement with antiquity through the gaze of the late-18th and early-19th centuries.  “Exotic Body” touches on the influence of Eastern cultures through fabrics such as lamé, and silhouettes such as saris and sarongs.

“Surreal Body,” in the final gallery, illustrates how both women affect contemporary images of the female body through Surrealistic practices such as displacement, playing with scale, and blurring the boundaries between reality and illusion, natural and artificial.

Schiaparelli, who worked in Paris from the 1920s until her house closed in 1954, was associated closely with the Surrealist movement and created such iconic pieces as the ‘tear’ dress, the ‘shoe’ hat, and the ‘bug’ necklace.  Prada, who holds a degree in political science, took over her family’s Milan-based business in 1978, and focuses on fashion that reflects the eclectic nature of Postmodernism.

Related Catalogue and Programs
A book, Schiaparelli and Prada: Impossible Conversations, by Andrew Bolton and Harold Koda, with an introduction by Judith Thurman, accompanies the exhibition.  The 308-page catalogue has more than 200 vintage and newly photographed images of the designers’ work, and a smaller “book-within-a-book” featuring more extensive “impossible conversations” between the two women.  Published by The Metropolitan Museum of Art, the $45 book (hardcover only) is distributed worldwide by Yale University Press.

A series of gallery talks explores aspects of Surrealism, classicism, and exoticism in pairings from the Museum’s collection, that relate to the work of Schiaparelli and Prada.  On Sunday, June 17, Judith Thurman moderates Good Taste/Bad Taste: The Evolution of Contemporary Chic, a discussion with style icon Iris Apfel and editor-in-chief of RookieMag.com Tavi Gevinson, on what it means to be chic in the 21st century.

On May 15, The College Group at the Met hosts a panel discussion, Defining Chic: Then & Now, moderated by Julie Gilhart (fashion consultant) with Francesca Granata (Assistant Professor of Fashion Studies, Parsons), Leandra Medine (The Man Repeller), Scott Schuman (The Sartorialist), and Lynn Yaeger (Vogue.com Contributing Editor) about the evolution of the term “chic,” followed by a reception, tours of the exhibition, and a workshop.

Follow us on Facebook.com/MetMuseum and Twitter.com/MetMuseum to join the conversation about the exhibition and gala benefit. Use #ImpossibleConversations and #MetGala on Twitter.