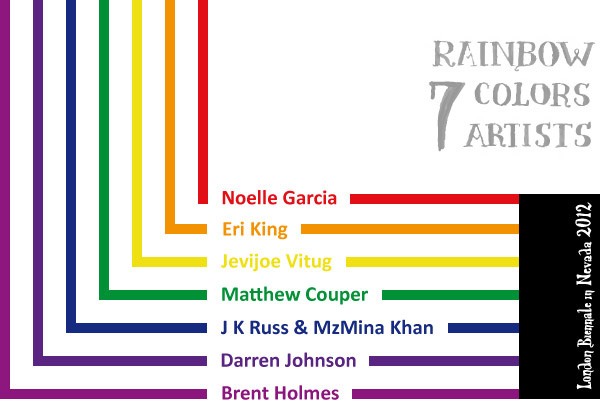 Seven Las Vegas and Henderson-based artists will take part in the second London Biennale in Nevada satellite event presenting performances inspired by the colors of the rainbow at the Pop Up Art House in Henderson on Saturday, July 21 at 7:00PM.  This year’s participation in the London Biennale will extend beyond the one-night-only performance event, Rainbow: 7 Colors 7 Artists, with an exhibition of the documentation behind and of the performances at the Contemporary Arts Center in Las Vegas September 6 through 29.  The artists are: Noelle Garcia (red), Eri King (orange), Jevijoe Vitug (yellow), Matthew Couper (green), J K Russ with Mina Khan (blue), Darren Johnson (indigo) and Brent Holmes (violet).

Rainbow: 7 Colors 7 Artists is coordinated by artist Jevijoe Vitug who instigated the inaugural London Biennale event in Las Vegas in August 2010 at the Contemporary Arts Center.  The London Biennale project was founded in 1998 by David Medalla, a Filipino conceptual artist based in London, who assigns the theme for each year’s biennale. The event aims to challenge and transform the notion of the art world ‘biennale’ as a large state or corporate-sponsored event with artists selected by curators based on their geographical location, citizenship, nationality, race and ethnicity by throwing open borders and encouraging a more intimate and community-based dialogue between the artists and audiences.  Over the years, the London Biennale has expanded with simultaneous satellite events taking place in Paris, Rio de Janeiro, Rome, Berlin, New York, Boston and Las Vegas.

Rainbow: 7 Colors 7 Artists will be a performance-based project executed by visual artists from diverse backgrounds who have chosen Las Vegas and Henderson as their home.  Instead of artists representing a specific locality, the artists will represent colors.  Most of the selected artists are painters by discipline and the performance on Saturday, July 21at the Pop Up Art House will be an extension of their studio practice.

“Each artist will respond to the color assigned to them but each performance is not exclusive to the concept of color.  The color is only a starting point to create a larger conversation that is yet to be heard and seen,” says Jevijoe Vitug.

The process of creating these performance pieces and the performances on July 21st will be captured and presented in a supplementary exhibition at the Contemporary Arts Center in Las Vegas from September 6 through 29 to further encourage interaction between the artists and the audience.  Admission to both the performance event and the exhibition is free.

Noelle Garcia was born in Reno, Nevada in 1984. Noelle received her BFA from the School of the Art Institute of Chicago in 2007. During her BFA career Noelle was awarded the Emilie Hesmeyer Memorial Award and The Klamath Tribes Scholarship. She also participated in the Oxbow School of Art in 2007 where she received the Barna Memorial Award.

Noelle’s work is narrative; a form of storytelling. Although her work has a sense of catharsis, Noelle’s work also offers a glimpse into the contemporary American Indian experience and into personal family relationships. Noelle uses photos of family members such as her deceased father and her many estranged siblings for reference. “The feeling of forgetting my family distresses me. I feel that the loss of memory and family also creates a loss of my own identity. I fear being cultureless. So I am forced to construct my own identity and family through research and imagination. The process of making artwork about my family brings me closer to the people I long for. Through my art process I am able to have a relationship with deceased loved ones such as my father.”

Eri King was born in Kagoshima, Japan in 1986 and currently lives and works in Las Vegas, Nevada. In 2011, she received a Bachelor in Fine Arts in Studio Practice and Photography from University of Las Vegas, Nevada. She currently owns and curates 5th Wall Gallery located in downtown Las Vegas inside the Emergency Arts. She has participated in group exhibitions at CAC’s Off The Strip: New Genres Festival (2010), CAC Eastside Projects Window Gallery (2010), Donna Beam Gallery (2011), Marjorie Barrick Museum (2011), MCQ Fine Art Gallery (2011), and has performed with artists such as MK Guth and Mai Ueda in association with NY Art Funds Production at P3 Studio, Las Vegas (2012). She recently received her first solo exhibition with Clark County Visual Arts at Winchester Gallery, Las Vegas and will be exhibiting in January 2013.

Eri King is an interdisciplinary artist. Her most recent work is an investigation into consumer identity in the backdrop of America’s contemporary social landscape. She utilizes an abundance of donated and discarded products to create site-specific large scale installations. The performative intensive nature of her processes is a way to recycle the efforts of labor into these various wasted consumer products. The towering stature of the pieces and great quantity of the materials being utilized functions as a way to confront the viewer in order to create a discourse about materialism and abundance of the things our society consumes and wastes everyday, and to challenge the viewers to exercise introspection about their own consumer roles in America’s capitalist system.

Philippine-born local artist Jevijoe Vitug’s work ranges from painting, performance and community-based projects often deals with survival and the effects of globalization on the environment and economy. He studied New Genres at the San Francisco Art Institute, CA.

Matthew Couper was born in New Zealand and is based in Las Vegas after immigrating to the USA in 2010. His practice over the past decade has appropriated aspects of western Art History traditions including Trecento, Quattrocento and the Baroque and he now uses established narrative traditions to discuss the space between myth, religion and art politics. Huffington Post art critic John Seed recently referred to Couper as an “artist with a Kafkaesque view of the world” whose imagery suggests “a pagan Catholic Cirque du Soleil”.

In 2003, Couper was awarded a Royal Over-Seas League International Scholarship to work and travel in the UK. He returned the following year to exhibit at Jerwood Gallery, London. He held his first public solo exhibition with published monograph, The Museum Of Inherent Vice at the Sarjeant Gallery, New Zealand, after receiving a nine-month residency at the Tylee Cottage Artist in Residence program in 2007. His exhibition ‘Thirty-Three’ (with gallery monograph) is touring several New Zealand public art galleries and museums from 2012 to 2014.

J.K. Russ was born in New Zealand and graduated from Manukau School of Visual Arts in Auckland with a BVA (photography) in 2001. Her early work investigated female sexuality and performance, combining photography with moving image. In August 2010, Russ relocated to Las Vegas, USA and discovered a strong performance culture with a focus on neo-burlesque.  Burlesque elements have featured in her recent collage work, along with desert creatures, birds and rock formations.

In 2012, Russ’ work was featured on the Las Vegas episode of The Ethical Hedonist, produced for the Travel Channel UK, her work was included in ‘Anti-War Anti-Orgasm’ at Light & Space Contemporary in the Philippines and she exhibited collage works in a solo show ‘The Desert of Earthly Delights’ at Sin City Gallery in Las Vegas.

Darren Johnson employs traditional realist painting techniques in unorthodox presentations to create artwork that deals broadly with society’s miscommunication. An MFA graduate of Bowling Green State University and 2010 recipient of the Nevada Arts Council’s Artist Fellowship, Johnson most recently exhibited in the solo shows Important Conversations in Midwestern Brown at the Las Vegas Library District Galleries; and The Skeletons in Our Closets Are Planning a Parade in Honor of the 2010 Census at OXS Gallery in Carson City, NV.

Toshie McSwain is an artist and art educator for elementary school students. She was named Best New Visual Artist 2010 by alternative news magazine Seven Weekly for her solo exhibition, I Told You So, at the Winchester Gallery. McSwain uses layering and staining to create visual imagery that has a dreamlike quality of being familiar, and at the same time, indiscernible.

Brent Holmes is an artist living and working in Las Vegas, Nevada under the moniker Barfing Rainbows. Primarily self taught, and currently employed as a graphic designer for over seven years, his adoration of the imagination is visualized in all mediums from paintings, photography, performance, and sculptural work.

Brent celebrated his first solo show as Barfing Rainbows in 2011 at Blackbird Studios, with a series of paintings and “Desperational” posters. The Barfing Rainbows philosophy is that creativity is a nauseating, painful and difficult experience but absolutely necessary to get out (much like vomiting). His most recent dialogue is with the rapidly disappearing old Las Vegas and the urban decay which surrounds it, juxtapose with humanity or its lack there of with in it.

An obsession with modern human absurdity, psychosexual dichotomies, and questions of placement and identity riddle his paintings photographs and texts, with an ever-winking smile towards the greater mystery’s that underlie all things. Never without humor, and always in difference to eldritch creative entities such as Francisco Goya, Frank Frazetta, Alberto Giacometti, and Oscar Wilde.

Australian born Adam Nankervis, also known as the Museum Man, has been exhibiting at museums and galleries in the US, Europe and Asia for over the past 20 years. His collaborations with Derek Jarman, David Hockney and Peter Tully have developed a varied experimental practice and participation in a diverse set of mediums. In 1992, Nankervis co-founded Mondrian Fan Club along with David Medalla in New York City, they recently had a joint exhibition at the Galeria Baro in Sao Paulo, Brazil. His works are in the collection of the Arts Council England, James Moores Collection, Leo Keulb Collection and private collections worldwide. He was also invited in several important exhibitions such as LIFE/LIVE Musee D”Art Moderne de la Ville Paris – Centro Culturelle de Belem Portugal curated by Hans Ulrich Obrist (1996); Boijmans von Boiningham curated by Peter Fillingham; and exhibited at the Liverpool Biennial (2004/2006), The First Latin American Performance Biennale Santiago (2007), History of Disapearance Centro Culturel de Palacio de la Moneda Santiago Chile and Bereznitska+Partner Gallery Berlin/Kiev (2009).

In 2011, “Prelude: Paul Thek in Process”, an exhibition of Paul Thek’s works, was realized in collaboration with Adam Nankervis, founder of Another Vacant Space in Berlin.