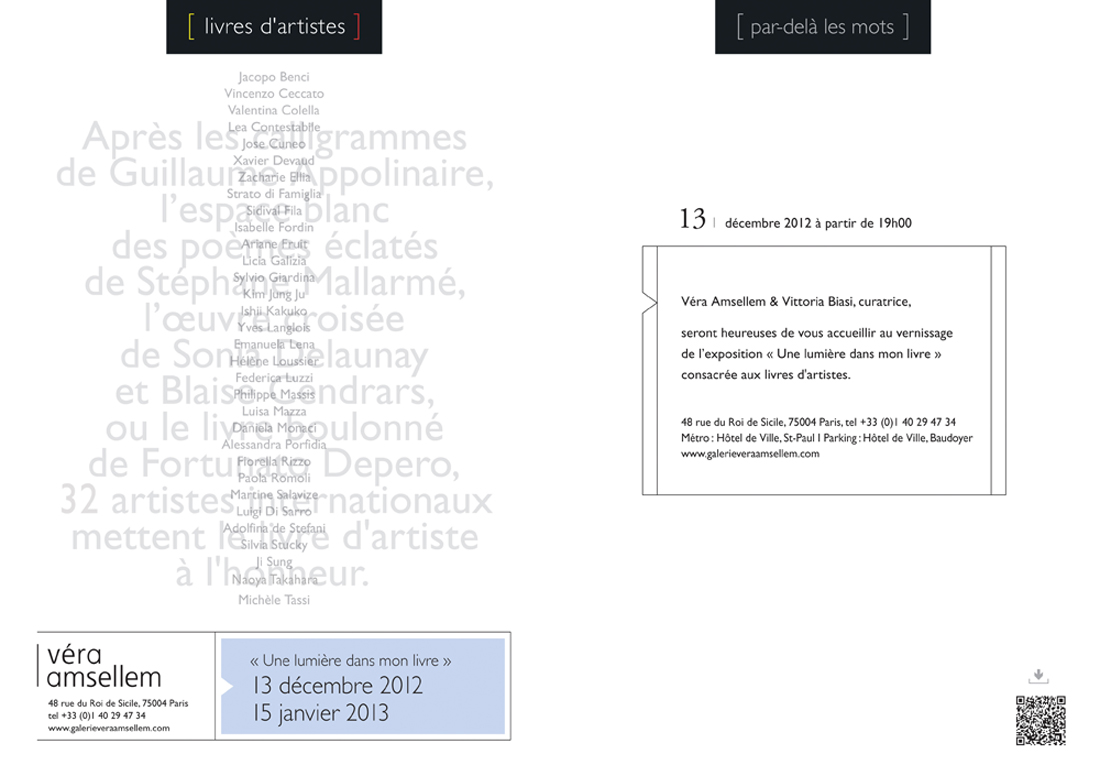 Early in 1900 the artist book bolsters a pathway, an identity of art-object that gives origin to collections considered the most important in the world: Bertini’s Fund at Florence National Library and the Collection for the Books of Artist at Paris National Library.

A possible history of the artist book linked to both the themes of white and light can be recognized in the spaces blank that Stephane Mallarmé introduced into his writing and that in Claudel’s poetry becomes rhythm and for Marinetti is liberty. Malevic entrusts the Suprematist ideology to a handmade catalogue realized in twenty reproductions of the work. It will be Fortunato Depero to confer to the book the dignity of a work of art.

The book of artist is an occasion to seek the essence of a language, of a poetics, hidden inside its pages. A light in my book titles  such an exhibition, where the word light hints at a revelation, at a bright meeting with the own self and to the feast of light that occurs every 13 December, in remembrance of a book dedicated to the Ville Lumiere  by Robert Delauney during 1926.

Sylvio Giardina and Stato di Famiglia propose a book/album full of reproductions duplicated with slight variations, creating a flowing image that due to optical effects, becomes a virtual sculpture that comes out the pages and reproduces itself for the action of a mirrored case. Sylvio Giardina and Stato di Famiglia transcribe the history and poetics of a study made by them on the performance that takes in the search on the fingers movement in the weaving from Vermeer studies on, just like in Gulliver’s travel to Lilliput. The light is the history of any mankind! Its formula can be written on paper in perpetual memory or admire it transfixed as in a play where magic and innocence are the conquests of a pathway, to make emotional meetings beyond any personal or territorial details. Vincenzo Ceccato, Valentina Colella, Jacopo Benci tell of such a scientific/fabulous idea of light, which is the only correspondence, the fact you can interact with on different levels. Vincenzo Ceccato’s theoretical elaborations set the light as a formula. Jacopo Benci traces a historic pathway of pictorial, philosophic, artistic quotes in order to reach the concept of evanescence, extreme language both real and creative. Valentina Colella enters into the behavioural structure of light, transferring luminist casualness into the creative rule. Following a semiotic route and without raising ones own eyes Fiorella Rizzo draws the marks of the bulb linking them to the absence, to the inner pursuit of a light. A hard, inward and deep route unites Fiorella Rizzo to Daniela Monaci along the semiotic pathway that we can define as narratological following Paolo Fabbri. The enunciation of light as stated by the exhibition title circumscribes the tactile surface but expands the virtual and poetical one. Paola Romoli Venturi separates the light through tarlatan pages where even the concept of the whorls of a shell, hinting to the eyes of Santa Lucia (St. Lucy), is enriched with iridescent chromatism. In Luisa Mazza the spherical transparency makes it think to impregnability, to monad, to the desire that condemn the mankind, it can be translated into the sentence “il manque”. Light is a cultural and optical acquisition settled within ourselves but uncatchable at all times. Like the white! Alessandra Porfidia translates the white monochromy into line which is her experienced matter of fact with different materials and statures. In the book of artist the history of her line solicits chromatic calibres, being after the truth beyond the truth to face the never-ending challenge of the hero/man. The Grey Friar Sudival Fila and Federica Luzzi, Emanuela Lena collect the tears of space and write down a document on the world! following their own mind sketch. By the pages of their book enter into a difficult conversation with the depth of thing, of soul, of intrinsic nature, in suggestive reply to the art that runs after the deep thread of darkness, the light. All the works as all the existences contain the connection between space and time. Adolfina De Stefani proposes the book of artist riddled with roses which multiply and interact with the wishing action “of plucking the petals off”. The languages of art speak about the own self, between truth and falsehood, between suggestions of  present and strains of all our yesterdays, among which the books of  the artist like Silvia Stucky, Isabelle Fordin, Lea Contestabile, Kim Jung Ju are linguistic projections. The tale of man sets different balances with ones own history. Lea Contestabile privileges a fetishist connection enriched by white/light significance. Isabelle Fordin inscribes freedom of mankind between transparency and white, recovering an Etrurian symbology. Silvia Stucky constructs a thin layer of script with painted or paper textures from which the light overruns like a natural or a white element, reminding us Arab and Eastern facades. Kim Jung Ju realizes a project in “consequence” making images and archetypes flow from a natural fibre almost fossilized. The exhibition Una luce nel mio libro has an unexpected plot with the works of Licia Galizia, of Kakuko Ishii. Their books are works in motion, that reproduce natural sound both hidden or clear when listened to. The pages are like organ-pipes, they are strips covered by touch. In such a sense the work of Naoya Takahara rejoins the particular argument of emptiness and fullness, suggesting the mathematical precision cut out from pages of hand made paper. The concept of Yin and Yang is essence of the matter, plastic worth. The sculptural dimension of the book of artist is made absolute in the works of Ji Sung and Michéle Tassi that shade their symbols within impenetrable pages! The book is a conceptual work par excellence: Luigi Di Sarro with his works in the Centre Pompidou’s collection, pinpoints the mark as a double component both of obstruction and revelation that puts into effect in the mysterious work and at the mirror, reflecting a determinism truly unknown to us. Yves Langlois’s book travels the artist’s intimacy that wants contain  the full experience within the marks of a casket, tackling the ability to see beyond, to trace out a border line among things after having snapped objets d’art and the world. Martine Salavize links pictorial research to the social view of the poet Antoine Emaz.

For the photographer Zacharie Ellie the book of artist enters into relation with the reality as it seems before any mise en scene to reach the essence of photography. Ariane Fruit recomposes the transfigured reality of  images that are enriched and embellished by gestures and particulars which tell beyond the true life. For some artists, like Hélène Loussier and Jose Cuneo, the book is an occasion to structure a language, a thought, a thought of political transformation that solicits possible worlds. The books of artist of Philippe Massis and Xavier Devaud are involved in a pictorial project both  of love and freedom whose core is the expressive and swift stroke. The light enters into the book of artist as a pictorial research, colour and thought sublimation, selection of materials that begin a luminist challenge, that can be represented by the feather, symbology of annunciation that on the wings might comes out the feathers book of Nelly Saulnier. In the history of art, the symbology of light is an endless pathway, of wonder and love, of perception and substantial assumption as it is realized and proposed in A light in my book exhibition.